Happy 2023! I hope yours has started off with promise :-) This is what I've been working on for the past few weeks. I'm starting this year off with an updated "Orlosian Warriors" collection. This is something I have wanted to do for quite a while, so I finally took the time to complete rewrites, add a few scenes, design new covers, reformat each book in the series and publish an updated boxed set. This set includes every book released so far plus the origin story. I'm planning to release the next sequel, "Rehobeth's Passion: Orlosian Warriors Book 4" this Spring.

Getting this done has been a challenge to say the least. We've had 2 family deaths, major surgery, and a hospitalization and we haven't even made it out of January yet, so managing to get this set published is a major accomplishment for which I am very grateful. Writer life at its finest. I've got big plans for this year so overcoming this challenge was important. Life is constantly hitting all of us with unknowns, and focusing on this set gave me an escape, a feeling of accomplishment in the midst of events that were outside my control. So, let me tell you more about it...

Orlosian Warriors are the vampire-like descendants of Nephilim, children of angels and human women. The set includes: A Nephilim warrior of regal lineage is sent to guard a human trouble-magnet, but following his instincts could cost him his soul.

Last time, he destroyed an entire city. What’s a strait-laced Nephilim-descendant to do when a human trouble-magnet steals his heart? 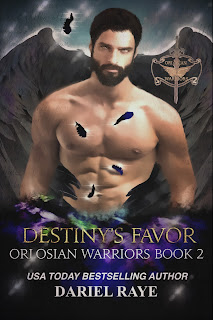 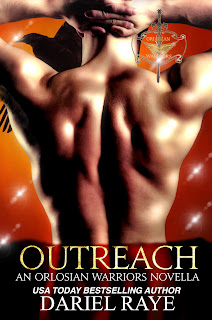 Broken dreams, an ancient enigma tainted by the past, and a mystical bond beyond time and space.

Thrilled about receiving funding for her new outreach program, Jaci meets Andreus and embarks on a journey wrought with mystery and answers to questions that have plagued her for years.

Three years after the accident, Jaci Allen believes she is as lost now as she was the day she awakened to the sudden, tragic deaths of her husband and two-year old daughter. Throwing herself into her work has allowed her to avoid the reminders of her broken dreams, leaving her dangerously empty inside, always seeking…something.

Accused and convicted of the murder of his adoptive mother’s husband at the age of sixteen, Andreus admits his guilt, but acknowledges to himself that his memories of the night the abusive man was killed remain incomplete at best. 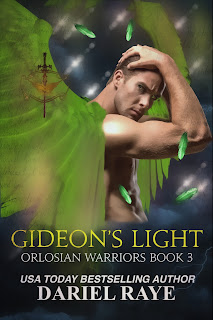 Gideon always thought he’d be the last to fall. His life depended on it.

Iris Johnson is a brilliant astrophysicist who has always believed in keeping her emotions under wraps. Adopted as a baby, she has never felt truly loved. After a terrible accident and a failed relationship, she swore off men, content with working long hours and stargazing.

Born nearly 200 years ago, Gideon is an Orlosian Warrior, a descendant of angels, and in his world, the ratio of men to women is 500 to 1. Willful, insubordinate, and impetuous, he is one of the most feared seekers – elite law enforcers – because of his exceptional ability to kill.

When Gideon is severely injured in battle, his contact with Iris puts her life in danger and awakens desires he has never known. To save her, he will have to make impossible choices, commit a cardinal sin, and break the law he has sworn to uphold and defend. 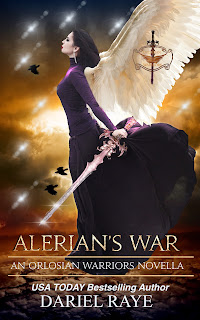 To pass through the Forbidden Zone, she needs him, but one of his kind killed her father. Can she trust an assassin?

Nephilim assassin Anael has always been a loner, bound only by his own code of honor, but the moment he witnesses Alerian in battle, something inside him shifts. Unable to reconcile the angelic vision haunting him night and day with his current mission, he takes a post beside her brother as a way to stay close to her, but Alerian can never know his true identity. 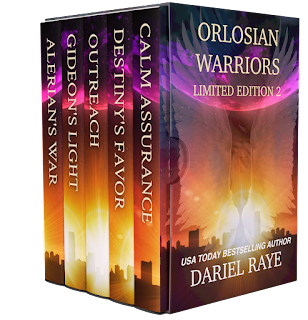