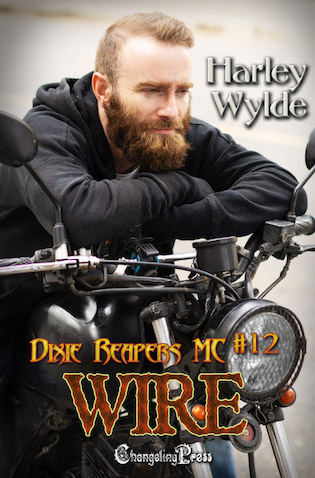 
When my past came knocking, I wasn’t expecting it to arrive in such a tempting package.
Lavender – My parents weren’t the type to win any awards, but I did learn a few things. Like how to read lines of code and get through the backdoor of pretty much any site or program. I also learned about the man my mother had dated when she’d met my dad, someone who has intrigued me for years. I never thought I’d get the chance to meet him, until my parents end up dead and I can’t think of anyone else who might be able to help. I know too much, know my parents’ death wasn’t an accident, and now I’ve been targeted. If the infamous Voodoo Tracer can’t help me, then I’m screwed.
Reality is so much better than fantasy, and with one look, I know the reason I haven’t dated is because I was waiting. For him.
Wire – I never really expected my past to come knocking at the front gates, nor did I expect it to be in such a sexy package. Lavender isn’t what I’d call a siren, but with her glasses perched on her nose, her messy hair, curvy figure, and adorable tees, she’s exactly what I want and don’t need. A nerdy, geeky, super intelligent woman who craves me as much as I crave her. So I did what any man would do… I claimed her. Now she’s mine, and if an enemy from my past thinks he can hurt her, I’d like to see him try. He might have killed her parents, but I will destroy anyone who tries to take her from me.

Author Bio:
Harley is the international bestselling author of the Dixie Reapers and Devil's Boneyard series.
When Harley is writing, her motto is the hotter the better. Off the charts sex, commanding men, and the women who can't deny them. If you want men who talk dirty, are sexy as hell, and take what they want, then you've come to the right place.
Harley Wylde is the "wilder" side of award-winning science fiction/paranormal romance author Jessica Coulter Smith. For fans of Gay Erotic Fantasy Romance, Harley/Jessica also writes as Dulce Dennison.
Check out Harley's other books, and read some random facts about the author, at harleywylde.com.
Follow Harley on Amazon to be notified of new releases, or sign up for her newsletter.