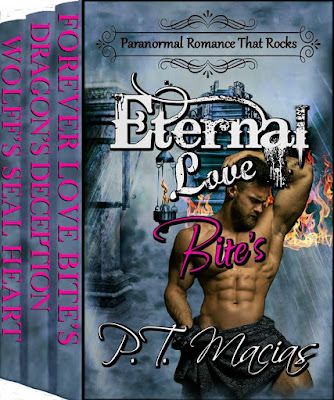 Angels,
Have you met Rage? Why not? I bet that you have!
"Not all love bites are equal! Some are for eternity!"
One click it! Reserve your copy!
books2read.com/EternalLoveBites


Forever Love Bite’s Copyright 2018 P.T. Macias
Included in the Eternal Love Bite's Box Set!!
Excerpt! ♥
Rage teleports over to Nicole’s office. He looks for her in the office and then looks out into the garden. He places the microchip case on her desk.
He walks over to the french doors and walks down the steps. His eyes roam around the garden looking for Nicole. His red lips turn up, and his white teeth gleam as the moon rays sheath him in an embrace. His eyes widen, then he lowers his eyelids, focusing on Nicole as a Fairy.
She twirls around in the garden, the moon rays caressing her as she spins around and around releasing soft pink iridescent fairy dust. Her pale pink woven translucent, shimmering organza bodice drapes over her full firm breasts, drawing his attention to her pink nipples. The skirt swirls out around her thighs, appearing like strawberry whip cream, exposing her trim legs.
Fuck! She’s incredibly beautiful! I love how her soft pink skin shimmers as she swirls under the moon rays. Why didn’t I notice before? She’s simply lovely!
The soft strawberry and rose scent drift towards Rage, enveloping him and assailing his senses. He inhales deeply; her scent seeps deeply into his soul. He slowly exhales, shuddering as his fiery blood races through his veins.
Damn it! She’s so damn enticing. I never noticed her scent. What the fuck!
He squints his eyes looking at her full breasts as she moves her hands up to pull out her scrunchie hair tie from her hair, releasing her soft silky curly hair. Her hair swirls around her; the shimmering Fairy dust falls on her and around her. She inhales deeply, instantly his spicy scent assaults her soul.
Oh my, Rage is here! I’m going to fly over to him.
Rage’s eyes are fixed on her as she twirls around and suddenly disappears. He walks out into the garden and looks around following the sprinkle of pink sparkling Fairy dust. He cups his hand, moving in a circle trying to catch some mystical dust.
Nicole suddenly appears in her miniature size, roughly 12 inches tall, and sits on his open palm. She smiles up at him, winking, and blows him a kiss with pink Fairy dust scattering over him.
“Wow! You’re exquisite! Nicolette, what a privilege to see you as a Fairy!”
Nicole throws back her head, leaning into the curve of his fingers, crossing her long legs. Her laughter rings out, soft, enchanting, and musical.
“Rage, you’re such a flirt! I know that you’ve had all sorts of ladies. Truly, you’ve never seen a Fairy?”
Rage laughs moving his hand closer and moves his left hand up to place a long elegant index finger under her chin. He slowly lifts her face up, slowly his lips turn up into a sexy smile. He gazes deeply into her beautiful bright pink eyes searching for her secrets.
“Truly, you’re my first!”
Nicole disappears, leaving pink fairy dust in his palm. She appears next to him in her full size wrapping her arms around his arm. She looks up into his startled face. Her laughter rings out, enthralling him.
“Ohhh, I’m your first?! How special is that! Now you’ve managed to captivate my heart.”
Rage moves quickly wrapping his arms around her small waist pulling her closer to him.
“Nicolette, you have no idea how mesmerizing you are!”
Nicole grins moving her hands up his arms to wrap around his neck.
“Ohhh. . . . . la la! I’m so going to take that as a possibility. . . . .a . . . . . . promise. . . . . a real opportunity of seeing you!”
Forever Love Bite’s is included in the Eternal Love Bite’s Box Set
Vhampier's Realm
Paranormal Romance That Rocks
Copyright 2018 P.T. Macias 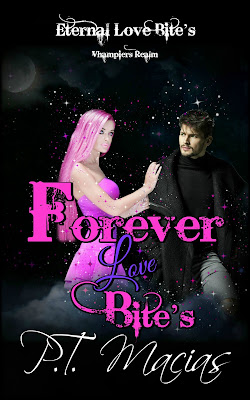 Get this and more from best selling author P.T. Macias with the Paranormal Romance That Rocks Box Set Collection!
Forever Love Bites. . . . .
Time is ticking

. . . . . . forcing Prince Maximillian into angst. His promise and obligation to select the perfect mate drives him insane!
Old beliefs and tunnel vision render him blind. The Prince is unable to recognize what he has in front of him.
The sweet sexy elemental Fairy makes the Prince blood boil, heart flutter, and soul soar. The sassy fairy uses all her charms and a dash of fairy dust to convince him that she’s perfect.
One click it! Reserve your copy!
The Collection: