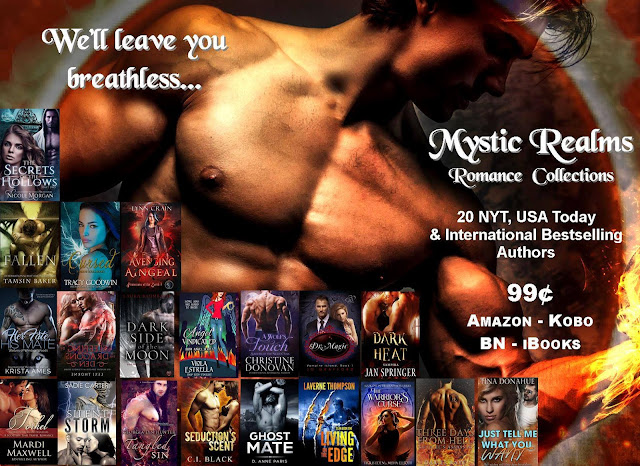 Hello there! I hope you're enjoying your weekend. This has been an exceptionally busy month, with "Mystic Realms" only 2-weeks away, and on pre-order right now, we're all hustling to get the word out about it. There are so many great stories in this set, and each one is very different. Believe me, you do not want to miss this one! So, I'll get right to it. This is a short excerpt from my contribution to the set, "Three Days From Hell: Kushiel's Assassin." I'm sharing it in my new Facebook group today, and thought decided to share it with you as well. Let me know what you think in comments.

Excerpt
“Your key.” The manager handed Anitra a small envelope with the keycard. “Suite 333.”

She accepted it and walked to the elevator. She could not help wondering about the sudden glint in the manager’s eyes when he saw the suite number, but decided not to ask. The night had already been strange enough, and she wasn’t sure she wanted an answer. She gathered Rumor and his things and walked away without a word, the added bonus of Ms. Lillian allowing her to charge whatever she needed to the room rendering her speechless.

Anitra smiled as she stepped onto the elevator. Ms. Lillian’s exclusive matchmaking business, “Heaven’s Touch,” was revered and respected by any and everyone with money and power – those who knew about it, that is. No matter how grateful she was, Anitra still hoped to God her benefactor was not trying to hook her up with some clown.

She needed a man’s drama like she needed a bullet in her back a few hours ago. Plus, most men seemed intimidated by her…unless they were trying to kill her, that is. She was a big girl, and she had always been a fighter, but she had never been more frightened than she had been when she smelled the sulfur from that bullet aimed at her. Right now, she was just tired and... lonely. The voice in her head that never seemed to keep silent long enough spoke up. Matchmaking is what she does. Getting hooked up with a man is a hell of a lot better than running for your life.

She blew an errant strand of hair out of her face. As long as there was no one in her room, suite, whatever, waiting to kill her, it was all good.

Just before the door closed, Rumor whimpered and a huge hand slid inside, causing the doors to automatically stop. Heat rushed through Anitra’s body like a furnace. She glanced around to see if anyone else had been affected by the unseen force, but apparently, she was just having a young adult hot flash. At least that was what she thought until the elevator doors opened to reveal the source of titillating heat. 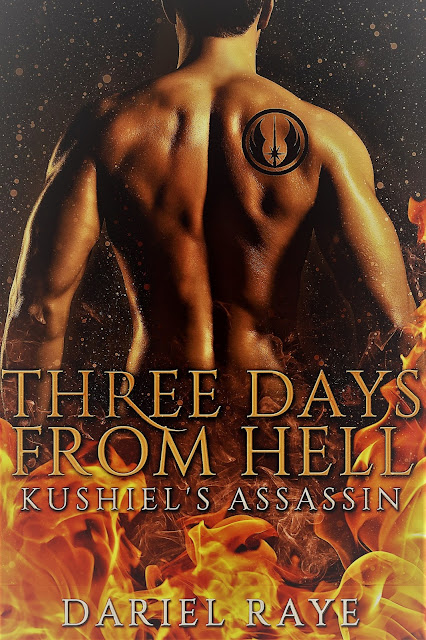 Anitra covered her heart with her right hand as she gazed into the smoky gray eyes of very possibly the most gorgeous man she had ever seen in her twenty-nine years. Not a pretty man, but breathtakingly beautiful in his masculinity. Testosterone rolled off him in waves, yet Rumor did not say a word. Testosterone in any amount usually resulted in low-pitched growls and vicious, territorial barking from her four-legged best friend. Anitra glanced down at him to make sure he was still breathing.
He was.
Next, she looked behind her to find every pair of eyes on the elevator glued to the smokin’ hot new arrival. Of course, they all appeared to be more terrified than excited. As usual, she was the odd one out.


Grab your copy of this limited edition set now from these retailers: Amazon | iBooks | Kobo | Nook