To celebrate the upcoming release of Sicario: book 3 in the World's End series, by Kai Tyler, Duce, the first book in the series is on sale at $0.99/£0.99. 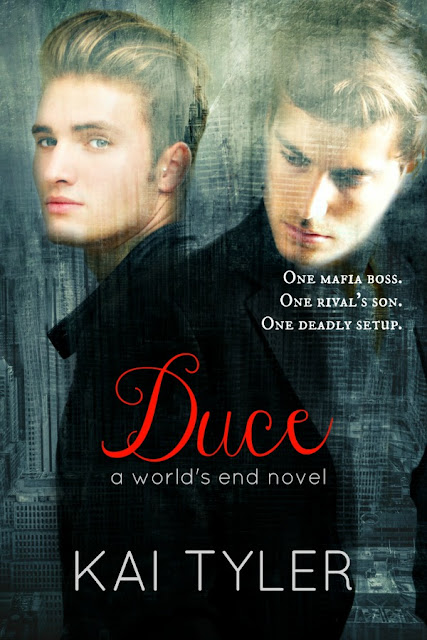 Until he tangles with a man who plays by totally different rules.

Dante Orsino has been raised in the old ways of honor, loyalty and respect of the business. His role as mafia underboss is more than just a job. It also makes him an heir to one of the biggest families in the Southern Territories.

For Dante there's no other life except—the life. And he wants Carlos in his. But in the New World, a gay man is a dead man. Can he find a way to keep everything he loves and stay alive?

In a new world gone mad, even the good guys are bad. Welcome to the World's End series. 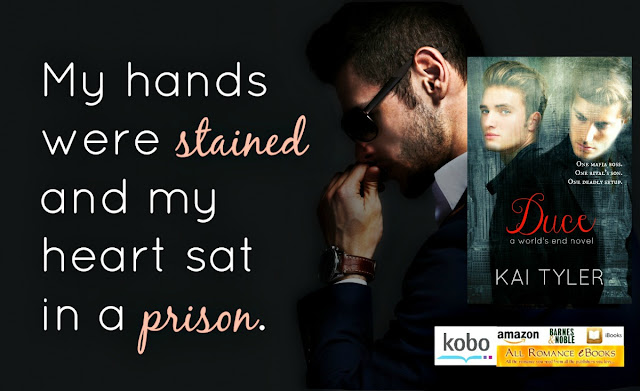 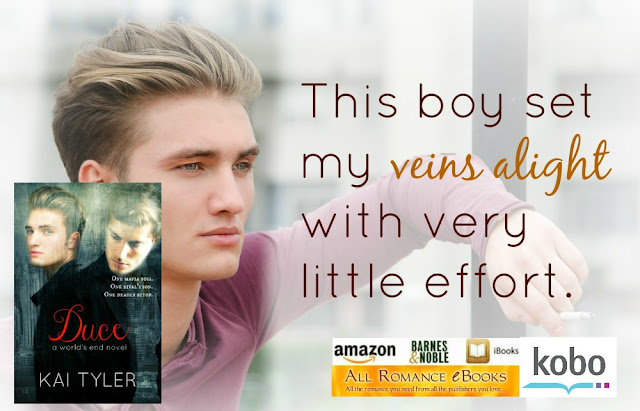 
Copyright 2015 Kai Tyler
*****
At the bar, I ordered brandy, swallowed a sip, and then took the curved stairs up to the VIP area. Men sat on dark leather sofas arranged so they overlooked the main jam-packed club area below. I found a single-seater armchair in the corner of the lounge to perch on, my back to the wall.
I never liked sitting in a room with my back exposed. I preferred to see trouble before it found me. Problems were never far away, vacation or not.
From here, I watched male dancers in nothing but jockstraps on raised, caged platforms dotted around the club, sweat and glitter making their toned bodies glisten.
After tossing back the shot, I caught the eye of a young waiter who sauntered over and took my refill order. Waiting for the drink, I took my time to survey the other people in the lounge. A group of three thirty-something-year-old men sat in the section next to mine. Two of them looked like a couple by the way they touched each other.
The third met my gaze and flashed a set of white teeth as he smiled. Arching his brow and lifting his hand, he enquired if he could come over. He was good-looking with dark- brown hair and a well-built body under the t-shirt. Even his trousers seemed to hide a reasonably-sized shaft.
I tried to picture holding the man down, kicking out his legs and taking him over the table. My cock gave an unenthusiastic twitch. I was still too tense to entertain company. With an almost imperceptible shake of my head, I dissuaded him from getting up. The man shrugged and tipped his drink in salute.
The waiter brought my refill. I took a sip and relaxed into the leather chair, welcoming the gentle alcoholic haze in my mind that stripped away my agitation. My gaze trawled, exploring every male form in sight.
Another group of men sat a few sofas away. These were younger than me, too fresh-faced to be nothing more than just barely legal. Boisterous, they talked and laughed in loud voices, drawing attention.
I spotted him and my world skewed.
The boy—he appeared more boy than man—was whispering something to the person sitting next to him, when his blond lashes lifted in a slow, teasing manner.
My heart stopped and my skin prickled. If I wasn’t usually cool under duress, I would’ve been drooling.
The lad was what? Twenty? Twenty-one? Cute as hell in a smart mint-green polo shirt and navy trousers made of expensive shiny fabric that clung to a lean body. He came across as prep-school material and looked young enough to still be in college. Face like a fucking angel, dirty blond hair that flopped over his face, and pink lips that pouted in the way fashion models did.
I had no problem picturing the gioventù on his knees, that mouth stretched around my girth.
As he rose from the sofa, his dark and huge eyes shone with mischief. One of his friends laughed and lowered his head toward the low table, a rolled note in his right hand.
Columns of white powder lined the glass-topped surface and the man leaned over, sniffing half of the line before he straightened and repeated the action with the other nostril. Finally, he tilted his head back, pinching his nose.
My lip curled down, my jaw tightened, and I averted my gaze. The drug remained illegal, but just like homosexuality, it was freely available in Exilado for the right price.
I shouldn’t begrudge the young men their vices any more than I should condemn myself for having sex with other men. Still, I couldn’t help the weight of disappointment that settled on my shoulders. I’d seen the damage addictive drugs could wreck on perfectly normal lives. I’d taken an oath to keep the toxic substances out of Vincenzo territories. San Torino wasn’t my turf and there was nothing I could do other than ignore the young men snorting the white powder.
"Can I buy you a drink?" Blond boy had ambled over and stood only inches away, his lips curled in a ten kilo-watt smile.
My gaze held captivating eyes of dark green. For a moment, I forgot my disgust at what I’d just seen the gioventù’s friend do and simply admired the specimen before me. The flawless skin, the perfect nose, and the slender body of a person on the cusp of manhood made me increasingly aware of my own increasing heart beat.
Damn. He was beautiful. I didn’t think I’d ever described another man with such a word, which reminded me exactly why the lad wasn’t my type. I liked them tougher than he looked. Not delicate. Not someone I had to worry about breaking.
"I've got a drink." I gave a gruff reply and lifted my glass to my lips but I might as well have been drinking water as all my senses honed in on the person in front of me.
Undeterred, the boy lowered his body in the chair opposite and extended his hand. "I'm Carl. It’s a pleasure to meet you."
I stared at the manicured, slender fingers that didn't look as if they'd seen a day's labour, reinforcing the feeling Carl wasn't for me. It didn't stop me from picturing them stroking my skin as my cock sprang to life.
"I didn't invite you to join me." My tone remained cool, in contrast to the heat riding my blood.
"You didn't."
"I'm not interested."
"I bet I could make you interested." Carl leaned across and settled his hand on my thigh.

ABOUT KAI TYLER
Kai loves writing stories about forbidden men and relentless love, about gangsters with heart, antiheroes who do what they need to do to survive in a crazy world. These men commit to the lives they lead 100%—with heart, body and soul and when they fall in love you can be sure they bring the same level of passionate devotion to the people they love.
Kai's debut dystopian MM romance novel, Duce, was an All Romance eBooks Top 50 Bestseller when it came out in 2015. Visit www.kaityler.com to connect with Kai.

PREORDER A COPY OF SICARIO