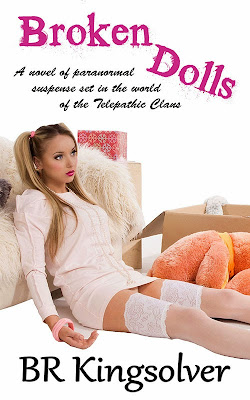 BR Kingsolver is one of 6 authors in our big cat shifter anthology, "Herek, Kitty Kitty." Take a look at this new release (also one of the prizes in our benefit giveaway) and click the link at the bottom to join our benefit giveaway event on Facebook!
Broken Dolls was released September 29, 2013. It’s a paranormal thriller set in the world of The Telepathic Clans.

Private investigator RB Kendrick makes her living nailing cheating spouses, digging up other dirt to help in a divorce, finding long-lost relatives, and occasionally sniffing out criminal activity and fraud.

When she takes a job to find a missing girl, she has no idea she is headed for the most dangerous case of her career. Usually, her ability to read minds gives her an edge. But when the people she’s hunting are also telepaths, that advantage is limited.

The search takes her into the dark underbelly of telepathic society, where anything, and anyone, is for sale. She discovers that telepathic women and girls are being trafficked as the ultimate sex slaves.

With people trying to kill her, she’s on the run, not knowing who she can trust. Will she find the missing girl, or become a victim herself?

Author Bio:
BR Kingsolver is the author of the Telepathic Clans series (The Succubus Gift, Succubus Unleashed, and Succubus Rising) and Broken Dolls, a paranormal thriller.

I grew up in Santa Fe, New Mexico, among writers, artists and weird Hispanic and Native American myths and folklore. I've lived all over the U.S. and earned a living doing everything from making silver and turquoise jewelry, to construction to computers. I currently split my time between Baltimore and Albuquerque.

I love the outdoors, especially the Rocky Mountains. I’ve skied since high school, with one broken leg and one torn ACL to show for it. I’ve hiked and camped all my life. I love to travel. I’ve seen a lot of Russia and Mexico, not enough of England. Amsterdam is amazing, and the Romanian Alps are breathtaking. I was in Paris and Iceland this summer.

Brendan knocked on the door at exactly eight o’clock. I opened the door and enjoyed watching his reaction. He didn’t say anything, just stared. I’m not normally vain, but any woman who tells you she doesn’t enjoy an appreciative reaction when she’s all dressed up is a liar.
In his limo, I watched his face flush and his breathing quicken. The succubus pheromones definitely had an effect. I was glad the ride was short. I’m not sure if his control would have held if we’d spent more time closed up together.
It was just the driver and the two of us, and I considered taking them out. Scanning the area around us, I was able to sense the O’Byrne team, but also at least two other groups of telepaths within a block of us. Too chancy.
We walked into the restaurant and I had to smother a giggle. The couple ahead of us was Rebecca and Donny, who cleaned up quite nicely. When we were seated, I looked around and found them sitting at a table about twenty feet away from Brendan and me.
*How are we doing?* I sent to her.
*He has at least eight men surrounding the restaurant,* Rebecca replied. *Seems like overkill. We’re outnumbered. I don’t think we’re going to be able to take him tonight.*
I settled in for dinner. At the very least, I could use this to gather information and set him up for another try.
After we ordered and the waiter brought the wine, Brendan leaned forward, staring intently at my face. “How did you get hurt?”
I forced blood to my face to feign a blush. “I’m rather clumsy sometimes,” I said, looking down at my lap. “Is it really ugly? I’m sorry.”
He smiled. “You’re beautiful. I’m concerned because it looks like someone hit you.”
I forced more of a blush, feeling my face grow warm, and shrugged. “It’s really my fault. I do stupid things sometimes. I shouldn’t make him angry.”
“Who? A boyfriend?”
I tried to shrink deeper in my chair. I’d seen this kind of body language too many times. Women trying to make themselves small, offering submission.
“Yes,” I said.
“In London?”
“Yes.”
“Is that why you’re back here in Dublin?” He was using Empathic Projection to make me confide in him, make me feel safe with him.
*Let your shields leak a little,* Rebecca sent. *You don’t want him to know how strong you are.*
I did as she suggested and felt a rush of emotion from her. Emotional pain and humiliation so deep I was almost overwhelmed. I’d never felt anything like it. You can’t project a feeling you haven’t felt. In the back of my mind, I wondered when the strong, confident, swaggering woman I knew had felt that way. I saw O’Driscoll’s eyes light up with pleasure as the feelings leaked through my shields. This was what he enjoyed. Suffering and humiliation.
“I think it’s good that you got away from him,” Brendan said.
“He just needs some time away from me. After he cools off, I think he’ll accept my apology.”
We ate dinner, and O’Driscoll did his best to continue milking the emotions from me, asking about my boyfriend, trying to get me to go into more detail about the emotional, psychological and physical abuse I’d suffered. He was solicitous, caring, comforting. But he never let it go.
*He’s loving this,* Rebecca sent. *I can feel the pleasure oozing out of him all the way over here.*
*Yeah,* I responded. *He’s a Goddamn emotional vampire.*
When the waiter cleared our plates, I excused myself to go to the ladies’ room. When I was coming back, Rebecca sent, *He spiked your drink.*
It figured. He was so turned on that he wasn’t taking any chances. He wanted to take our ‘relationship’ to the next level. I shuddered to think what that might entail.
As I neared the table, I turned my ankle enough to send me off balance and hook the heel of one shoe on the other. Lurching forward, I put out my hands to catch myself and knocked over both my water and wine glasses. The liquid poured across the tablecloth toward him. He jumped back, upending his chair with a crash. Everyone in the restaurant turned toward us.
*Wow,* Rebecca sent, *you’re good. That was nicely done.*
*I do clumsy well. I have a lot of experience,* I told her. I heard her bark of laughter from across the room.
“Oh, my God. I’m so sorry,” I wailed. “I’m so clumsy. I’m sorry. I’m sorry.” I picked up my napkin and tried to mop up the liquid.
“You stupid cow,” O’Driscoll said. He was livid. Seeing him wiping at a wet spot on the front of his jacket and pants, I hurried around the table and tried to wipe his pants. Of course, the napkin I was using was soaked, so it only made it worse. I kept up a steady litany of apologies.
Two waiters hurried over to try to contain the catastrophe.
*Man, I’ll bet you could fry an egg on his forehead,* Rebecca sent.
I choked back a burst of laughter, hoping the sound that I made sounded like a sob. Rebecca pushed more humiliation into me, and suddenly tears streamed down my face.
“Oh, God, I’m so sorry,” I wailed. “I didn’t mean to. It was an accident.”
O’Driscoll assumed a stony face, letting the waiters clean up and try to dry him off. I watched him out of the corner of my eye, seeing firsthand what I’d seen so often in the minds of my clients. Abused women always make excuses for their abusers. They blame themselves for everything that goes wrong in a relationship. They try to make everything right. And even when they’ve done nothing wrong, they lie to protect the bastards. It was enlightening seeing O’Driscoll automatically assume that I deserved punishment for anything that inconvenienced him. 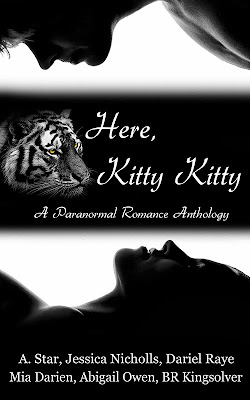