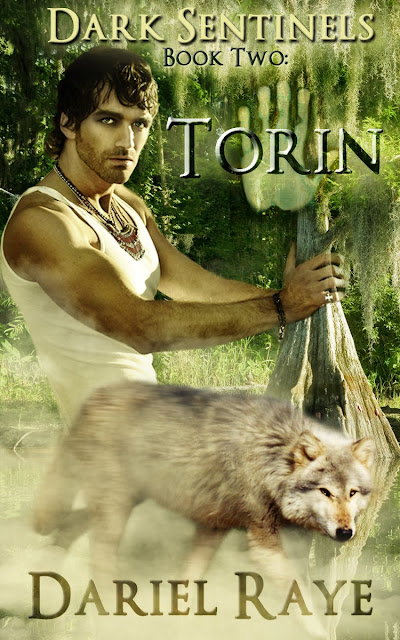 Since I'm working frantically on "Dark Sentinels Book Three: Parrish," the first full-length in the series ("Dark Sentinels Book Two: Torin" has a little over 40,000 words), I thought it was about time to share a couple of great reviews :-) While I'm working on book three in this wolf-shifter series, my first big cat shifter story will be released in a charity anthology (brain-child of author/editor Mia Darien) to help the Exotic Feline Rescue Center, with 5 other author friends: Mia Darien, BR Kingsolver, Abigail Owen, Jessica Nicholls, and A. Star. We'll host a big Facebook giveaway/event! More about that later, so stay tuned :-) Also posted a contact form at the end for my new street team, Raye's Ravers, so click on the link and fill it out if you like my books and have a few minutes per week to help get the word out about them :-)

Stephanie Bates is a real estate lawyer. When Torin DuMont enters her office for an appointment, Stephanie’s life will never be the same.  In spite of the fact that Steph’s office called to cancel the appointment, he insisted on waiting until she would see him.  When she finally saw him all she did was throw him out.  Not one to take no as an answer, he waits outside her office for her, only to see her being assaulted by three men.  The minute he saves her, he realizes that this human has somehow gotten his defenses down and he is attracted to her.
Torin is a werewolf and an alpha sentinel. The only alpha sentinel to be with a human is Sable, and his woman Akila.  What chance is there for him to have a relationship with a human, especially one that has no idea what he really is?  He needs Steph to protect the Wild Lands making it a federal preserve and sanctuary, but he can’t get over his need to help her.  When her apartment is broken into, he takes her to his home.  What does she know that is causing people to want to harm her?
Stephanie moved to Florida after she found her father dead.  For the first time since that happened, she feels safe with someone. Torin is that someone.  She realizes that even though there is so much about Torin she doesn’t know, she has fallen in love with him. Does he feel the same?
In this book we are also brought up to date on what happened with Sable and Akila.  Their relationship is a long distance one, and she wants more, but will Sable see it her way.  She wants marriage and a life with him but will his pack accept her?  He has finally agreed to take her to his home and introduce her to everyone in the pack. Has she finally gotten what she has always wanted?
Of course, in addition to the romance between the sentinels and their women is the ever present feeling of doom.  The sadistic Mr. Moore is still capturing wolves and using them for his evil purposes.  Torin’s wolves have gone missing, and Sable has come to help in any way he can, but will it be enough?
This was every bit as wonderful as the first, romance, sex and the constant presence of evil.  Will Torin and Steph find what Akila and Sable have?  Is there hope of a mating between a sentinel and a human? Are they compatible enough to have children together?  Well, I can’t wait for the next book so I can get some more answers and meet another hunky alpha and another amazing potential mate.
http://www.paranormalromanceguild.com/reviewsdarielraye.htm
Reviewed by:   Linda Tonis
Member of the Paranormal Romance Review Team

"Dark Sentinels Book One: Sable"Released July 13, 2012
Sable, a sentinel wolf shifter, is captured and locked in his wolf form until Akila, a veterinarian, tries to tame him and unleashes a 6'5" baby blue-eyed surprise.
Dr. Akila Marshall is a veterinarian with a calling – save as many stray animals as possible. The only child of wealthy, yet distant parents, she’s convinced that love is not for her. Until…
Sable’s search for his twin sister leads him to Akila. Born into a rare species of wolf shifters whose main purpose is protecting others, he has always been forced to fend for himself, but Akila’s loving, protective nature draws him – and not a moment too soon. Together, they must learn to trust each other enough to overcome a new, deadly enemy
5*****Stars

Akila Marshall is a veterinarian with a passion for animals.  Born to rich parents who gave her everything but attention and love, animals became her friends and family.  She is a woman who cannot turn her back on any animal in trouble, and it is that devotion that changes her life.
When she rescues a wolf in danger of being killed, little does she know that this wolf is a shifter named Sable.  Sable is looking for his twin sister, Syreena, who has disappeared and in that pursuit he is captured and drugged by Mr. Moore, a man set on experimenting with animals to strengthen the human race.  He knows all about what Syreena and Sable are, and he is determined to use them, but Sable gets away.  Sable and Syreena have spent their lives being turned away from packs, until it is discovered that they are Sentinels, wolves whose main purpose is being a guard to a pack.  It is in this capacity and only in this capacity that they are accepted at all.
Akila brings him home and falls in love with the wolf she calls Brutus aka Sable, and he apparently feels the same.  Can he reveal to her what he is?  Will she accept him as both a wolf and a man?
This is a novella but it reads like a full novel, mystery, betrayal, love and romance. This is the first in the Sentinel's series and I can't wait for more. Although a short story, it was very entertaining. Akila is a wonderful character and her devotion to animals is beautiful.