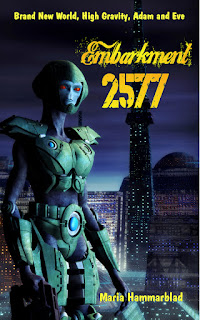 When Alexandra wakes up to an unknown environment, populated by a cat-like woman with a tail and a hologram of a rockstar, she knows she has to be hallucinating. Maybe she has hit her head, or finally suffered a nervous breakdown. It doesn't get any better from finding out she died and was taken into the future by the elusive Adam, whom she can't remember, or from people telling her she's on a spaceship.

The last year or so is gone from her memory, and she has no choice but to try to adapt. As days go by, her new environment becomes more and more unnerving. She finds herself helpless, and completely dependent on a man who isn't even human. 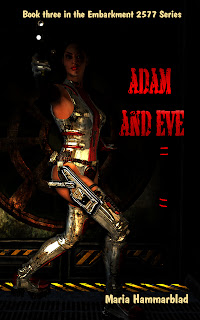 In this third novella in the "Embarkment 2577" series, Alex thinks nothing more could possibly stand between her and the peaceful and secluded life she covets. There aren't any aliens standing in line to meet her, no vengeful humans sneaking up on her, and no black holes anywhere in sight. She has found a home and a family, and nothing more could possibly go wrong. Right?

All she has to do before curling up in the sofa is to escort an unexpected visitor to the guest quarters until the Captain has the time to meet the newcomer. Should be a walk in the park... 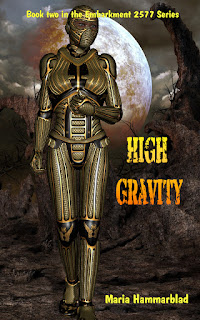 In this second novella in the "Embarkment 2577" series, the story picks up shortly after it left off in "Brand New World." The main character Alex has come to terms with her new life on a starship in the year 2577, and reluctantly won both respect and admiration for her actions during an alien attempt to conquer the ship.

Little does she know a number of new trials are about to shake her world. Besides encounters with alien species and an unexpected relative surfacing, a fatal navigation error will test her relationships with both her android lover and her friends.


Excerpt High Gravity
“Joshen Martinez is an old friend of mine, a mentor, he wouldn’t hurt you. He just wants to connect you to a machine that will tap out your memories. Your knowledge is valuable, and everyone would be able to see what you know. Sort of... like watching a movie.”
Having people watch all my memories? Intrusion of privacy, much?
I got to my feet. “I’ve heard enough of this. I have other things to do.”
Kevin stood up too. “Yes you do. Go pack your bags. This joke is over and you’re coming with me to the Kentucky.”
I took a step towards the door. “In your dreams.”
Blake said, “Sit down. Both of you.”
He didn’t raise his voice, but it was impossible not to obey. Kevin opened his mouth and my Captain made a dismissive gesture. “You’ve already said too much. Sit down and be quiet.”
Watching the scientist sink down, carefully keeping his mouth shut, filled me with glee. Blake pressed a button on his desk. “Commander Adam, could you come to my office for a minute, please.”
My husband’s voice filled the room. “Right away, Sir.”
I didn’t realize how tense I was until he stood in the doorway and I dared relax. He glanced between me and Kevin and crossed his arms over his chest. Adam was tall, strong, intimidating, and mine.
“What’s going on?”
Once again, Kevin opened his mouth. Blake snapped, “Silence.”
Kevin leaned back in his chair and rolled his eyes.
“Adam, this is Kevin. He has come to retrieve your wife.”
“Not happening, Sir.”
I wanted to squirm. “Can I move now?”
Blake smirked. “Yes Alex, you may move.”
I bounced to my feet and threw my arms around Adam. He hugged me back and murmured, “Don’t worry.”
After kissing me tenderly, he put his hands on my shoulders and turned me around so I faced Kevin. Then, he wrapped his arms around me from behind. “This is my wife. She means more to me than my life. She definitely means more to me than your life. If I were you, I’d choose my next words wisely.”
I glanced up at him. “I love you too.”
He smiled and brushed his lips over my temple.
Blake leaned his elbows on the desk and tapped his fingers together. “Mr Nolan, have we satisfied your curiosity, or do you wish to continue the discussion with the commander? I’m sure he’d be more than happy to demonstrate his... abilities. Would you like to see him fold a spare piece of hull plating a couple of times?”
“We’re good.” 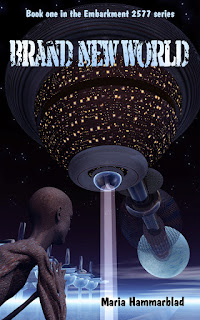 When Alexandra wakes up in an unknown environment, populated by a cat-like woman with a tail and a hologram of a rockstar, she knows she has to be hallucinating. Maybe she hit her head, or finally suffered that nervous breakdown. It doesn't get any better from finding out she died and was taken into the future by the elusive Adam, whom she can't remember, or from people telling her she's on a spaceship.

The last year or so is gone from her memory, and she has no choice but to try to adapt. As days go by, her new environment becomes more and more unnerving. She finds herself helpless, and completely dependent on a man who isn't even human.

"Brand New World" is the first novella in the "Embarkment 2577" series. 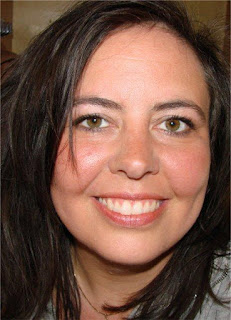 Born in Sweden in the early 1970's, Maria showed a large interest for books at an early age. Even before she was able to read or write, she made her mom staple papers together into booklets she filled with drawings of suns and planets. She proudly declared them, "The Sun Book." They were all about the sun. She also claimed, to her mother's horror, that her being on Earth was a big mistake and that her alien family would come and bring her home at any moment. This never happened, but both the interest in space and the passion for bookmaking stayed with her.

As an adult Maria's creativity got an outlet through playing bass in a number of rock bands, and through writing technical manuals and making web pages for various companies and organizations. She did write drafts for a few novels, but the storytelling muse was mostly satisfied through role playing online on Myspace. It was here, while writing stories together with people from around the globe, she stumbled onto Mike. They started talking out of character, and she moved over to Florida to him late 2008. Today the two are married and live in the Tampa Bay area with three rescue dogs. 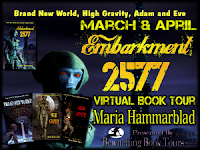