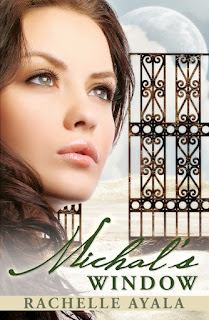 
It's not easy being a woman, least of all princess of Israel. Married as a prize, abandoned as a wife, Michal fights to claim her rightful spot next to King David, the man she loves with all her heart.


Separated by war, concubines, and kingdom politics, Michal embarks on a journey of adventure and heartache where she is befriended by a goddess-worshipping priestess and tempted by a Philistine prince.


From reading scrolls high atop the palace walls to seduction with a henna-painted body, Michal is not your ordinary Bible heroine. Join her in Michal's Window and let her delight you with her courage, devotion, and outrageous passion in her relentless drive to win back her husband.

It’s seldom that I read something that moves me the way this book did. Based on the romance of the biblical King David and his first wife, Michal, daughter of King Saul, I classify “Michal’s Window” as a romantic tragedy. Author Rachelle Ayala has taken a classic, beloved story, starring the first wife of “a man after God’s own heart,” and penned fictional details realistic enough to make the reader cry, yell, and scream.
David arrives, a young musician in King Saul’s court. The only one capable of lulling the nearly insane King Saul to sleep with his beautiful music, David quickly gains his adoration, but incurs his wrath and bitter hatred just as easily when he starts to win the hearts of Saul’s people. Assured that he is to be the next King, he slays the Nephilim giant, Goliath, and gains the hand of Michal, Saul’s youngest daughter. Their love begins with the innocence of young lovers, but is soon overshadowed and tainted by the hatred and jealousy of Michal’s father because the people seem to love David more, and by societal beliefs that made love between a man and woman nearly impossible, as women were given and sold like property.
Impeccably written, “Michal’s Window” takes us on an epic journey – an adventure, even, through war-ravaged times and their effects on the people of those times. Women, of course, had no rights. They were viewed and treated as property, and respect for their wishes was nearly unheard of. Despite his good intentions, David was a man driven by the same desires and double-standards as most men. Michal saved his life, jeopardizing her own, yet he repayed her by continually taking other wives. “It’s different for me, Michal. I’m a man. Why can’t you just accept your place? Stop being jealous like a man!” Although that’s not written in the bible, I can just hear him saying those words to her.
Concerned more with how he was viewed by the people, particularly his men, than how he managed his household, time and again, his prideful, insensitive actions drove him to cruelty toward Michal, knives to her heart, and wedges between them. The helpless, powerlessness of women opened old wounds about the gender inequities we have yet to rectify today, but Ayala managed to show strength in Michal even in her seeming masochistic love for David, and I reveled in those rare times when she owned her power.
A victim of the common practices of her culture, she still owned fire, spirit, and power beyond her time, and she knew and understood God’s word. Despite David’s roving eye (and every other body part), it was these qualities that made him love her most of all. It was Michal who made him want to possess her and strike down other men who wanted her, yet he refused to understand that she felt the same way about him. His love for her, as often is the case today, was more possessiveness than true love. He also refused to obey God’s law regarding “one man for one wife,” continued to abuse God’s law with the customary double standard of faithfulness being required of women, while men had as many women as they desired.  This was a constant bane to Michal. David’s desire to possess more and more, was his eventual undoing, yet through all of this, he was a good-hearted man who did hurtful, sinful things, paid for some of them, and she loved him. Despite everything, Michal loved him and David knew that she loved him more and knew him better than any of his other women.
It got a little wordy near the end, but perhaps that’s because I was so fed up with David by that time. Ayala was so true to the laws and culture of biblical times, as well as David’s relationship with God and his people, the only thing I disliked about the book was the dark reality of David’s selfish insensitivity. Need I say more? Five stars!
http://darkparanormalromanceseries.com/2012/08/05/ 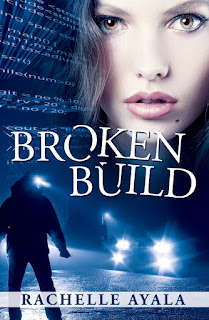 When a woman wrongs a man… can a man forgive and love?
Jen Jones hides a horrible secret behind her new degree, toned body, and exciting job at Silicon Valley’s hottest startup—until a man linked to her past is killed in a hit-and-run.
CEO and founder Dave Jewell is about to land a huge deal. He doesn't need blood on his car, threatening phone calls, and Jen wrapped in broken code and blackmail.
A gang of thugs hunts Jen, and she takes refuge in Dave’s protective arms. Together, they must thwart a killer and rescue an innocent victim from their past. Love blossoms, but a damaging revelation points straight at Jen, threatening to tear them apart forever.

From the author of Michal's Window comes a new suspenseful thriller titled Broken Build, set in the high-tech world with backstabbing and deception around every corner. The author, Rachelle Ayala, had sent me a free copy to review after I had previously reviewed her biblical romantic tale, Michal's Window. Honestly, I had no idea what to expect since this book is set in modern times.

The main character, or should I saw heroine, is Jennifer Cruz, a woman with a rocky criminal past, who has now gone to great manners (plastic surgery, etc) to disguise herself into a new identity, Jen Jones. She takes a job as a computer techno whiz for David Jewell, a software CEO, a man she deeply hurt six years ago in her past life. Of course he doesn't recognize her now. As she spends time with David, their old romantic feelings start to resurface, but she can never erase her past.

I think it is a little daring for the author to try a completely different genre for her second novel, but she did it beautifully, creating a world where nothing is what it seems to be. Broken Build has an intriguing plot full of mysteries, lies, romance, sabotage, secrets and twist and turns at the end of every chapter. The main characters, Jen and David, have great chemistry and steam up the pages. The dialogue is spot on, even with all the technology jargon. I can easily see Broken Build becoming a movie on cable television, like Lifetime. Overall, I really enjoyed reading Broken Build and I recommend it to others.
Stop by tomorrow for a glimpse of author and friend Kayelle Allen's addition to my Christmas list!

Rachelle Ayala said…
Hi Dariel, thanks so much for sharing your reviews.