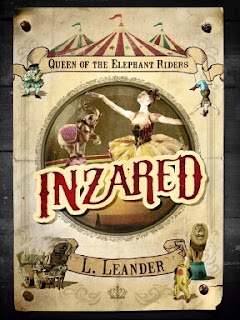 Sometimes life isn't what we wish for.  A Gypsy circus comes to a small Appalachian community in 1843.  A naïve, misunderstood farm girl is entranced by the sights, sounds and costumes and is persuaded to join the troupe.  Late one night she leaves the only home she has ever known and follows the Gypsy wagon circus.  She learns to ride the main act - an elephant named Cecil and she and the elephant form an instant bond.  She is given the stage name of INZARED, Queen of the Elephant Riders and is delighted.

But all is not as it seems.  There are undertones of danger and sadness lurking in the shadows, as foretold by the old fortune-teller Vadoma.  Inzared finds true love and works hard to gain acceptance into the Gypsy world.  Someone is sabotaging the circus - but whom?  Inzared and Paytre (the boss handler) search for clues.  What of the family Inzared left behind?  Will they ever forgive her?  Does she miss them?

This book is for anyone who has ever had a dream so big, so overwhelming that it consumed his or her every waking minute.  Sometimes you just might get more than you bargained for and maybe it’s not what you really wanted after all.

L.Leander has done an excellent job of accurately capturing the time period and the gypsy culture and you are truly pulled into the world of a travelling gypsy circus in the 1800s. The characters are very likable and realistic with dialogue that feels natural and fits the characters well. You really get to know the characters and connect with them. The story has a little bit of everything you could want in a book: romance, mystery, suspense, adventure, tragedy, and comedy. This is truly a book that can be enjoyed by just about anyone, no matter your typical genre preference.

This is L.Leander's debut novel, but from the quality of the writing, you would never guess it. Inzared is wonderfully written, plotted, and edited. Once I had started it, it was a challenge just to put it down. If this is only the beginning of what she has to offer, I can't wait to see what's next!

The "Holiday Gifts of Love" Blog Hop starts tomorrow. Mega-prizes and giveaways in addition to mine, so come back and see me :-D