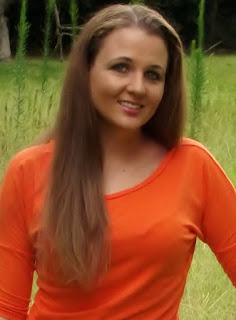 How about I tell you a bit about me first, the person behind the pen? I'm Wenona Hulsey, mother of two and blue collar worker by day.  But at night I turn into Wenona Hulsey, master of words and worlds.  I’ve always written for as long as I can remember. I kept journals off and on from the age of nine but I really got into writing about a year and a half ago.

I was searching for a creative outlet at a time in my life when I felt like I was living in a rut.  I sing terrible, I dance like I'm having seizures and my art looks like stick figures so I turned to what came easiest to me ---writing.  I started working on my first novel, Burden of Blood, and it moved along remarkably fast.  I guess that could be contributed to my recent binge reading of all books labeled paranormal romances but I had an idea of what I wanted and I put it to paper. 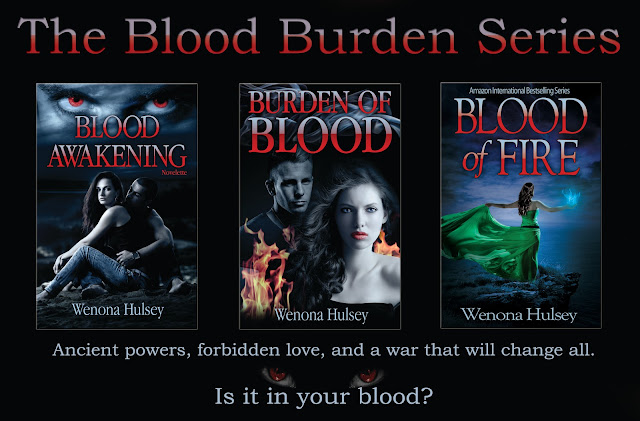 As I was nearing the end of my writing frenzy on Burden of Blood a fascinating novelette idea popped into my head and Blood Awakening was born.  It works as a back story to two of the main characters in Burden of Blood, giving you more detail and insight into who Nicole Keenan and her best friend Kat were before their world was turned on its head.  I would consider Blood Awakening more of a thriller, suspense with a dash of paranormal and comedy thrown in.  But Burden of Blood is full on Paranormal Romance with hot warriors and gothic fairies in leading roles.

Now that I've sent Blood Awakening, Burden of Blood and the final book in the series, Blood of Fire, out into the world, I'm working on the 3rd draft of my still untitled mystery thriller and I've started another project that will fall into the young adult genre.
I hope you all will give my books a read and I'm always glad to connect with readers in the internet world so be sure to reach out to me on me website, Facebook page, or Twitter.  Thanks so much for letting me join you today!

Blood Awakening Blurb:
Nicole, a small town Alabama girl, and her best friend Kat take a weekend trip to Panama City, Florida. Kat looking to have a good time and Nicole hoping to escape the pain of losing her mother for a little while. Little did Nicole know, the escape would awaken a ancient power that is hidden in her blood. A power that evil wants for its own and will do whatever it take to have it.
Burden of Blood Blurb:
Nicole Keenan is a police officer in a sleepy county town..content in her denial. She can hide her secret for only so long before an ancient grudge and the power hidden inside her burst to life. Dance with fierce warriors and Gothic fairies as southern tradition collides with Irish folklore. Nicole learns about love, heartbreak and The Burden Of Blood.

Blood of Fire Blurb:
Turning her back on everyone she loves, Nicole leaves Alabama to face the man who has made her life hell from the day he forced her powers to surface. She will face evil and end the war that has been brewing for centuries…or that's what she hopes will happen as the final story of the Blood Burden Series plays out. New characters, steamy romance, lives lost and an ancient war. Is it in your blood?

Join my email list for the latest on all my books, contest and much more!http://www.wenonahulsey.com/p/contact-me.html

Dariel Raye said…
Welcome again, Wenona! As I said before, your books sound fantastic, and I see you've gotten some great reviews, too. Congratulations! I really wanted my readers to see your blurbs and get a bit more info about you this time around :-)
October 26, 2012 at 10:59 AM

Unknown said…
Thanks so much for having me on, Dariel! I hope your readers enjoy the post :)