Today, I'm featuring two fantastic authors! Kristine Cayne is here with her new romantic suspense novel, and Jennifer James is visiting again with the release of "Love Kinection! We previewed her hot new contemporary romance back in June. Now, it's available at Amazon, Barnes & Noble, All Romance E-books, and Smashwords! Links are just below the blurbs, as usual. Very happy to have you here, ladies :-D 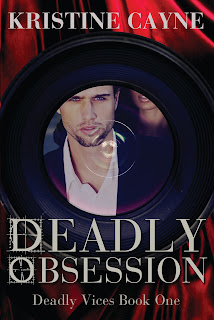 "Stock up on ice cubes because this is definitely one sizzling debut. Readers will be hooked from the first sentence - on the book and on Nic! As rich as a white chocolate cheesecake, Cayne's entrance into the suspense genre is invigorating, explosive and simply intoxicating." - RT Book Reviews (4 1/2 stars Top Pick)

When an Oscar-winning movie star meets a department-store photographer…
Movie star Nic Lamoureux appears to have a playboy’s perfect life. But it’s a part he plays, an act designed to conceal a dark secret he carries on his shoulders. His empty days and nights are a meaningless blur until he meets the woman who fulfills all his dreams. She and her son are the family he’s always wanted—if she can forgive a horrible mistake from his past.
A Hollywood dream…
Lauren James, a widowed single mother, earns barely enough money to support herself and her son. When she wins a photography contest and meets Nic, the man who stars in all her fantasies, her dreams, both professional and personal, are on the verge of becoming real. The attraction between Lauren and Nic is instant—and mutual. Their chemistry burns out of control during a photo shoot that could put Lauren on the fast track to a lucrative career.
Becomes a Hollywood nightmare
But an ill-advised kiss makes front-page news, and the lurid headlines threaten everything Nic and Lauren have hoped for. Before they know what’s happening, their relationship is further rocked by an obsessed and cunning stalker who’ll stop at nothing—not even murder—to have Nic to herself. When Nic falls for Lauren, the stalker zeroes in on her as the competition.
And the competition must be eliminated.

Deadly Obsession is available in print and/or e-book format at the following retailers:


Abby Fine still hasn’t gotten over the pain of a year-old betrayal and plans to spend this Valentine’s Day drowning her sorrows with a ménage of men named Ben, Jerry, and Riesling.


Her plans are diverted when she drops and breaks her new iPhone and gives in to a momentary hormone surge, agreeing to let office hottie and tech god Tom Walker squirm his way into her condo to fix it.


Tom shows up with his Xbox, spicy Chinese food, and a habit of stealing kisses every time she lets her guard down.
Can a weekend of laughter, video games, and movies change Abby’s opinion of stupid Cupid?


Where to Find "Love Kinection"