A Wish Too Dark and Kind by M.L. Blackbird 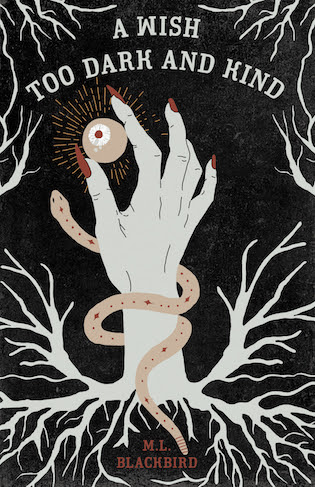 Among the immortals that inhabit our world, Arnaud Demeure is known as the man who can fulfill your one true wish or who can also conjure your worst nightmares.

Eight invitations are sent to eight immortals, and when Arnaud Demeure hosts a party, no one refuses his request. Why have they been summoned? Is it for a celebration or does a sinister fate await them? After all, in the ways of Magick, a party can also be a ritual to end the world.

As the mystery deepens, the attendees must overcome their personal grudges to unravel the threads of Demeure’s grand plan that has been centuries in the making. But, with one of the guests secretly working with their host to sabotage the group’s every move, it seems impossible to look behind the curtain to learn Demeure’s true intentions.

With each guest hiding dark secrets and darker intentions, will they be able to uncover Demeure’s mysterious motives or will the party prove to be the deadly nightmare that they each fear?

The young sister ran through the silent city while the prophet waited for her to arrive. The old man knew she would come; he had seen her already. Hidden by the shadow of an old staircase, eyes fixed on the door, he tried not to get distracted by the creatures in his vision.

Thousands of them, maybe millions, all crammed within glass walls.

The youngest sat at the center of the glass prison. It was taller than the tallest mountain. It was quiet amid the frenzy of its brothers. Its head so high it saw beyond the ceiling of its prison, straight into the realm of the Eldest Lords. Light leaked from underneath its shaking, half-closed eyelids. It peeked into the future.

As the prophet watched them, the creatures stared at him from far away. He could see them, yet his mind could not make full sense of their shapes, only of a few features. A crowd of wings, fangs, stingers, and every piece of every animal he could think of, and some he had never seen, crawling on each other while human parts pushed their way through. The tall one, its eyes closed, hummed over and over.

The others followed its chanting and moved back and forth in front of the glass holding them prisoners, just like animals expecting a bite of their prey.

The prophet almost missed the nun’s arrival. She ran up the stairs, hesitating as she put one foot on the first step.

From the roof, he tasted the entire city. A forest of concrete and metal spreading in every direction, so much so that nothing existed if not within it. The sun blinded him, shining in white and gold. Dawn was a miracle. He stood still, in awe of the most magnificent city, and he almost forgot he had followed someone.

But there she was, the young sister, standing close to the balustrade, her arms raised to the sky, her shape dark against the sunlight.

The tall metallic tower pierced the sky and stabbed the sun, just like an arrow. The star bled, scattering its light all over the town.

White particles fell from the sky. Snow perhaps, or dust, he could not say. He dared to look up. The sky had turned dark despite the sun shining in it, light still leaking over the city.

In the cold air, no sound but the wind.

Nothing else made a noise. No sound of cars or their horns. No talking or music playing, no chirping of birds.

Cars were still on the asphalt, their lights on. Some stuck in place, some coasting along the streets. Many had slid, hitting nearby objects. Tombstones in an old graveyard, they lay against each other, against lampposts, or sat on the sidewalks.

Men and women, asleep, still clung to their steering wheels.

Their heads blasted out of the windshields or hung from the windows. Hundreds and hundreds of bodies covered the sidewalks and the streets. More must have been resting within the buildings, unmoving, untouched.

Here and there, white, black, and red stains, each tens of meters long, covered the streets—flocks of birds caught in whatever happened.

Nobody moved, nobody talked, everyone rested in this cemetery, testimony of a dark miracle.

The world had moved on. The city, now empty, stayed behind.

Paris was dead, and the Great Ones were free. 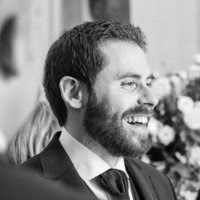 Born and raised in Sicily, M.L. spent most of his early life inventing stories and believing he could live in them.

In high school, he spent way too much time watching B movies, playing video games, and reading everything he could get his hands on, provided it wasn’t recommended by any authority figure.

M.L. spent most of his college years and adult life writing in languages only machines can understand until he decided to put some of his stories on the page.

After a few years spent in Scotland, now M.L. lives in Seattle with his wife, his cat, and a large assortment of books. When not writing, he still enjoys playing video games and explaining board game rules to his friends.