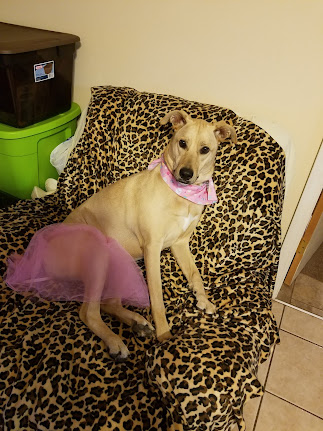 Wishing my precious girl a wonderful 6th birthday today!
If you're on Facebook, you've probably seen this picture before. It was one of her best photo-shots. She enjoyed being dressed up and even seemed to pose for her pictures. Brianns is a 6 year old German Shepherd/Pitbull mix rescue, and I will never forget the day we met. It was love at first sight for both of us. How do I know she felt the same way?
Mia, the high-kill animal shelter attendant stood beside me after leading us to the kennels. "She's the last of her litter," she said, pointing to Brianna. "She's just 8-weeks old, but not friendly and she can defend herself, so that's probably why the others were chosen first." 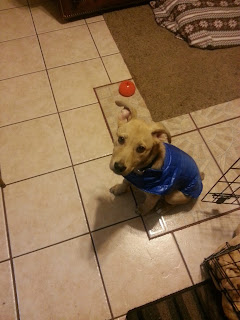 Doesn't she look sweet in this photo? She was HOR-RI-BLE :-D
I looked into some of the most beautiful brown eyes I had ever seen, and Brianna immediately met my gaze. I noticed she was sleeping on a light-blue pallet, the only soft place in the large kennel full of dogs of all sizes and ages. While we were standing there, a young couple reached for Brianna. Just before they touched her, she snarled at them. Of course, they snatched their hands back and immediately moved on to more welcoming prospects. Next, a few of the other dogs came over to see what was going on, but that, too, was short-lived as Brianna snarled, spit, and growled snapped at them until they all trotted away. 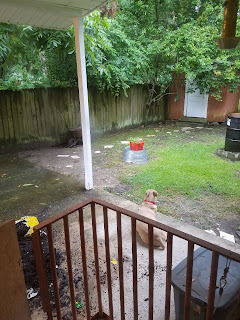 Notice all the dirt behind her. Yep, she did that, then turned her back to me rather than apologize.
"Let me see if she'll come to me," I said. 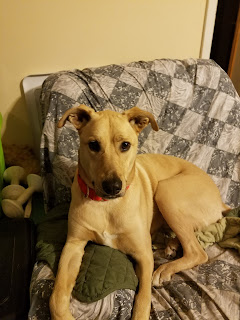 She takes way better pictures than I do.
Mia happily complied, opening the gate so I could reach in. I guess you know how things turned out by now. Brianna not only came to me, but cuddled up in my arms and rested her tiny head on my shoulder. When I put her down for a second, she made a quick circle and returned to sit at my side.
She's been there ever since. 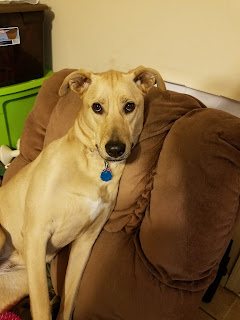 Happy Birthday to my very precious girl. You might not be everybody's cuppa tea, but you are the perfect best friend for me. If weather permits, we'll celebrate with a quality-time walk in the park and a pupcake.