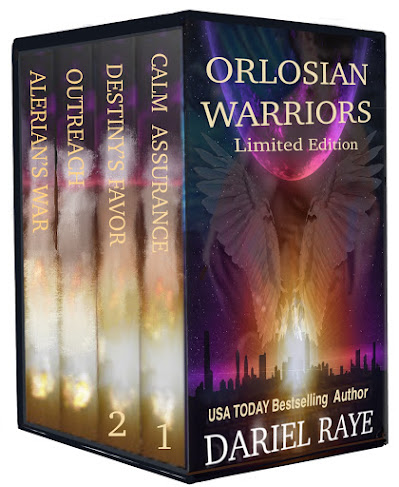 They look like angels, but they are far from it.

Meet the Orlosian Warriors. Descendants of angels and human women, their ancestors fell, but they escaped during the Great Deluge. Trained as warriors from the time they begin to walk, finding love has always been forbidden, but something new and exciting has begun. This Limited Edition boxed set includes:

Born more than 200 years ago, Japheth looks like an angel, but he’s far from it. In his world, the ratio of men to women is 500 to 1, and although he’s a superior being, he’s willing to break the most sacred law of his brothers, even drink human blood, if it means having the one woman he believes is meant for him alone.

Broken dreams, an ancient enigma tainted by the past, and a mystical bond beyond time and space. Meeting Jaci ignites the awakening of Andreus' frightening special gifts – gifts he has not only tried to hide from the rest of the world, but from himself. Can two shattered souls find a way to heal one another?