Booked For Murder by R.J. Blain 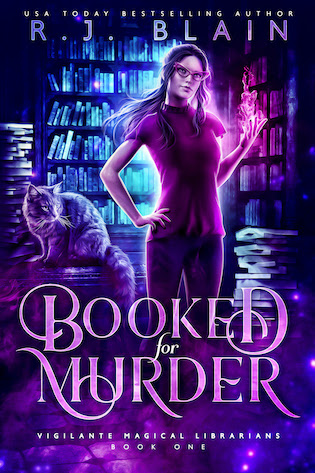 Life as a bodyguard and driver for the rich, famous, and powerful is dangerous on a good day, and after sustaining a crippling injury while on duty, Janette’s left with few options. Having signed a ‘for life’ contract but unable to work, she uses her skills to disappear.

Her new life as a librarian suits her. Nobody cares she limps and sometimes requires a cane to walk. She’s wanted for her knowledge, not her lethal magic. She’s surrounded by books, a woman’s best friend.

But when her former employer’s best friend is murdered on the steps of her library, old loyalties and secrets might destroy her—or set her free.

Teaming up with her co-workers to find the killer might keep her from being booked for murder, but unless she’s careful, she’ll find out exactly how far her ex-boss will go to reclaim what is rightfully his.

I assumed he still did. Bradley Hampton wasn’t the kind to quit once he decided to do something.

A sports car roared by, and it surprised me to discover I missed my once upon a time.

The vehicle, a red Bugatti worth more than the idiot who drove it, darted through traffic. I scoffed at the driver’s inaccuracies, skirting too close to the lines for anyone’s comfort. Precision mattered when controlling a car at high speeds—or at any speed, really. A single tap of the brake could end lives or save them. The wrong turn of the wheel could result in a crash. Such a mistake, not on my part, had cost me my once upon a time, and a chill sliced through me at the memories the red vehicle revived.

Once upon a time, my job had been to drive one of those cars, protect the man I’d been sworn to for life, and rise above all others except for him.

Bradley Hampton wanted only the best and to be the best, and he’d expected more from me than anyone else.

My once upon a time had ended with the recklessness of another bodyguard who’d believed a few minutes of time might actually matter. My last conscious act had been to position my car so my precious passenger would walk away from the accident. Even as I’d hit the brakes and turned the wheel, I’d been aware I would pay for his life with mine.

I’d done so with pride.

I couldn’t remember any fear, only pride.

I couldn’t remember any pain, either. Trauma could do that to a person, erasing critical moments.

Taking the brunt of the accident, created by another bodyguard’s foolish pride, had cost a principal his life in addition to dumping me into a coma so deep and long I’d been transferred across the country to a specialty hospital and left for dead.

I gave my ex-boss credit; he’d taken the ‘for life’ portion of my contract seriously, and he’d refused to have my plug yanked. Others of his ilk would have without hesitation. It didn’t change anything for me, though. His instructions, should I awaken, had been brutal and simple enough.

He didn’t want to hear a damned word about me until I could return to duty. 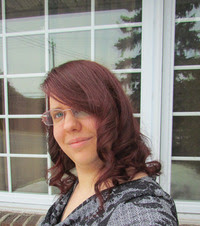 RJ Blain suffers from a Moleskine journal obsession, a pen fixation, and a terrible tendency to pun without warning.

In her spare time, she daydreams about being a spy. Her contingency plan involves tying her best of enemies to spinning wheels and quoting James Bond villains until satisfied