Excerpt and Giveaway: I Would Never...But If I Did by Maria Ann Green 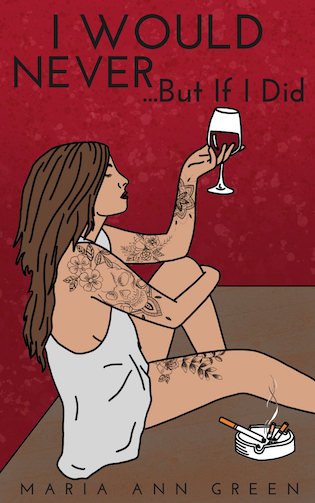 
Taryn Sams doesn’t believe in love. Period. Every time she’s gotten close, her happiness has been ripped from her, proving once again the only thing worth believing in is the inevitability of her own – and others – screw ups.
For Austin Wright, Taryn is the one who got away. But really, if he’s honest with himself, he pushed her away, with one hard shove. He did the one thing he told her he never would do, and shattered both of their hearts. But it’s been years since then, and somehow Austin and Taryn found a way to be friends, albeit dysfunctional ones.
Theo Evans is the other man in Taryn’s life. He’s also Austin’s best friend. But, to be fair, he’s been in love with Taryn longer. He accepts Taryn as she is, broken, and he’s willing to do whatever it takes to be the one she chooses in the end.
Taryn isn’t the only one with someone else in her life. Austin has a girlfriend he’s trying to see a future with even though she can’t live up to those that came before. Yet they keep coming back together like magnets, unable to resist the pull to each other. Taryn continues her relationship with Theo while starting up again with Austin, willing to give him one more shot though not willing to let go of Theo just yet. While juggling the two men, she’s hoping that her once-bitter heart will eventually open up and tell her who to choose, hoping that she isn’t deluding herself yet again about what’s real and what’s possible.
Can love win Taryn over, or will she screw up her own life yet again, and the lives of at least three others in the process?

Goodreads / Amazon
—
EXCERPT:
“I would never cheat on her, but if I did, it would only be with you.”
His stupid, insensitive words, from who-the-fuck-knows how long ago, a lifetime—from a couple girlfriends ago—feel more and more like I imagined them. And still, I can’t let go; they rattle and clank but just won’t leave. So I tip the bottle of booze back, taking another long pull. And I shouldn’t be surprised when I have to bite back both the gag and mouthful of saliva that follow way too quickly. At this point, it’s almost instant. But I am. Though, after some quick swallowing and a violent shudder, I’m pretty sure it’s not coming back up.
Yet.
I don’t even know why I’m thinking about him, about that, I forget what brought it up this time. But something always does, and, every time, those memories lead to nights like this.
Whatever.
Looking between the bottle in my hand and Maicy eyeing me like I’m a glass on the edge of a shelf, too close to falling, to shattering, I can’t take it. I just can’t. No thank you.
So I take another drink, intending to get drunk. 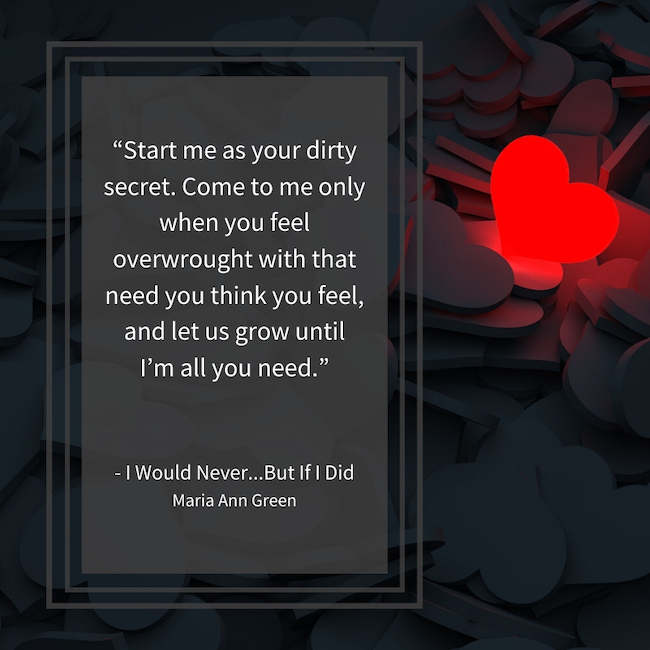 Author Bio:
Maria lives in Minnesota despite the frozen winters. Actually, she prefers snow drifts and icicles over summer and all that sweat running everywhere. She lives with her husband and little family, which includes a couple lazy cats who make great lap warmers. You can usually find her whishing that she lived in a secret cabin in the woods where she could be a hermit reading and writing all of the time. Instead she lives the suburban life where she pretends to her neighbors and the other moms around that she doesn't swear like a sailor, have hidden tattoos, and love a good glass bottle of wine. She absolutely believes in unicorns and ghosts and hopes vampires and monsters are real too. She's a coffee-in-the-morning and wine-in-the-evening kind of person, preferably with a nap in between. Maria prefers cats over dogs, books over people, and late nights over early mornings. She probably shouldn't talk to anyone until she's had her first cup of coffee. And if you ever want to hang out with her, you'll have to be game for a horror movie or just a quick run to target for two (hundred) little things. Also, you couldn't pay her to be in her twenties again; Thirties is where it's at. She's a creative, mouthy, introverted, proud bisexual, highly-sensitive INFJ, Slytherpuff, dork with a sweet-tooth.
Maria devours books, reading mostly in bed or listening to audio books in the car. Writing has been one of her passions for pretty much her whole life. So creativity is a necessity for her, always. After working in the mental health field for almost a decade, she's now living her dream as a stay-at-home writer, kiddo wrangler, professional snuggler, and constantly-tired-person. When it comes to her writing, she specializes in dark and twisted thrillers or gritty, angsty contemporary romances. But no matter the genre, she always prefers writing deeply flawed characters with dysfunctional relationships. She's pretty sure the whole "unlikable character" thing is a conspiracy because every character she loves have been labeled this way. Ridiculous. And because of this, she's pretty much found it impossible to write anything without at least a little mayhem.
Maria was once told she painted with her words, and that phrase stuck with her - because writing really is an art, and good stories are true masterpieces. She's always trying to grow and improve in her craft, shooting for a masterpiece of her own someday. And she plans to write forever because writing gives Maria the ability to disappear into new worlds and create people within twisting plots, all from the comfort of her couch. She will always believe that though not every story is for her, and her stories aren't for everyone, every story has a reader.