“I can tear your throat out right here,” he said, his voice a hushed whisper of threats and spilled blood. “I could kill you a thousand different ways where you sit.”
The nail cut deeper. Blood beaded, then spilled down my front, over my breasts. I choked on a whimper.
“Now tell me everything.”
Few knew Valissa’s secret but it already carried a death toll. One.
If the Gods ever discovered what she was, they would capture and flay her alive.
But in the land of Gods and Monsters, no secret stays hidden for long.
Lissa—drunk on the high of a midnight party that’s rife with mysterious pirates—gets too close to one of the pirates, who turns out to have secrets of his own.
Jasper is no pirate. He is a servent of the Gods. And the moment she touches him, she steals his power.
He kidnaps Lissa, and he’s taking her to one of the most brutal Gods in all the lands … He’s taking her to Prince Poison.
Prince Poison’s mere touch kills and his cruelty is said to stretch beyond even the darkest pits of Lissa’s soul. But when she’s standing in front of this fearsome God, ready to face her gruesome fate, the Prince might see more in her than she ever thought possible.
What could possibly be worse than dying at the hands of an evil God?
Becoming his obsession…
Gods and Monsters will be six books that are novella-length

Goodreads / Amazon
—
99¢ for a limited time only!
Or FREE on Kindle Unlimited!
—
EXCERPT:
Ava was kissing him—the pirate I’d spent all night wooing.
I saw red.
“He’s mine,” I gritted out.
She was too slow to hear me, so I stomped forward and snatched both of their arms in a vice-like grip, ready to wrench them apart—
It was a mistake. I shouldn’t have touched them—especially not him.
I cried out in surprise.
Ava choked on a scream and stumbled back from the pirate.
But Jasper was no pirate…
His skin was suddenly glowing. Then the glow faltered before it slipped into me.
Stunned, I watched his glow wriggle its way up my bare arm, along my collarbone, then rush down the other arm, where it sank into Ava’s skin.
I stole Jasper’s glow, his essence—his power.
With my touch, I’d dragged his power out from his skin and channelled it through my own body into Ava’s.
Mortiz was right. I should have stayed home. Stayed alive.
“Aniel,” whispered Ava, her disbelieving eyes fixed on Jasper.
He looked just as shocked as we did.
But I had no choice other than to snap the hell out of it and get as far away from him as possible.
This was what my mother died to protect me from—
No one can know what I am. A thief of power. No one can know—especially not an aniel, the child of a God.
I snatched Ava’s wrist harder than before. Her bones creaked under my grip.
“Run!”

Author Bio:
When not writing, Klarissa can be found in bed poring over a great new release, or reluctantly walking her demanding dogs who pretty much run the house.
She is the writer, Isla Jones. Isla uses the pen-name Klarissa for fantasy, while using Isla Jones for her darker, grittier horror works to help separate the styles and genres for her readers.
To contact Klarissa King, find her here: https://www.facebook.com/Klarissa-King-1005484536303985/?modal=admin_todo_tour
For Isla Jones' author page, click here: https://www.amazon.com/Isla-Jones/e/B07856GGDF

What can I say about romance? Quite a bit, actually, but I’ll spare you most of it. One of my most romantic notions is a man who loves enough to protect his woman from the harshness of life – a shelter. I think of the word “husband” – literally, house band (band around the house). He is first into battle, the protector, provider, willing to sacrifice himself for the woman he loves. Now that’s romantic! The beauty of it is that when that love is reciprocated, his woman wants to protect him, too. The last thing she wants is to lose him in battle or in life, even if he is adamant about protecting her. Ah, but it’s his intent – his willingness that makes me love him. Truth is, it's a partnership in which two people want to look out for each other.
A few years back, prompted by a writing contest, I envisioned a race of beings spawned by Mother Nature Herself, solely to protect the defenseless – endangered animals, the environment. What would they be like? This race of beings would have… 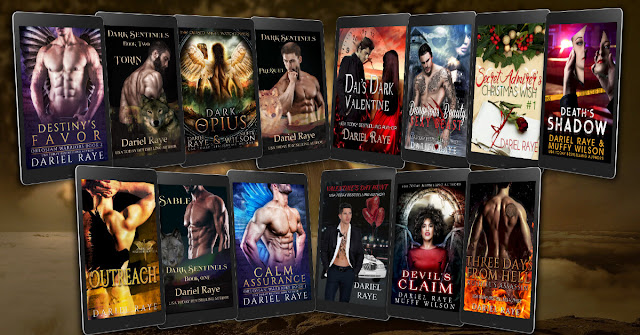 Need an Escape from Coronavirus Drama?

Need a break from Coronavirus drama? Of course, you do. I've got just the thing to whisk you away from it all. You guessed it. Books. Several of my books are only 99 pennies fot a limited time, and for those of you who are Prime members, they're free with Kindle Unlimited! I'll tell you a little about some of them here, and you can see them all here.
For sweet romance lovers...

She just wants a date for Valentine’s Day.  He needs a new direction.
This year, the hunt is on!

Get it here
Got a thing for shifters?

Prequel, Books 1 and 2 are available now! Book 3 is coming soon Click here for more
Nephilim, anyone?

"Outreach: An Orlosian Warriors Novella," Books 1 and 2 are available now! Book 3 coming soon. Click here for more
Remember to check them all out here, and visit my featured specials and giveaways page for even more books to take a break from COVID-19. Stay safe :-)