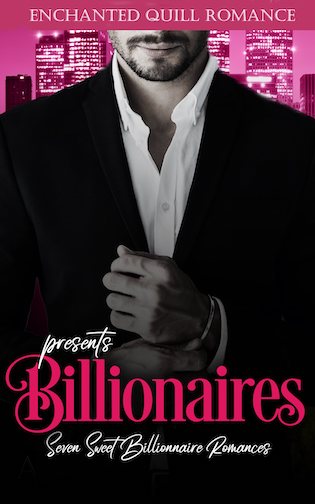 
Charming Billionaires, small towns, big cities and the girl of their dreams is waiting
Enchanted Quill presents Billionaires; the first in our Sweet Romance collection which includes seven beautiful billionaire romances that are sure to give you many swoon-worthy moments.

Featuring irresistible men with big hearts, this limited edition set is sure to have you turning page after page. With happily ever afters galore you’ll fall in love with this stunning collection.
Scroll up and one click now to see if true love really can conquer all.

Goodreads / Amazon
—
SNEAK PEEKS:
Kendra saw Michael from half a block away. He leaned against his Ferrari. The car looked so out of place amidst the cobblestone sidewalks and crepe myrtle trees. He wore dark denim jeans and a turtleneck. Even in that casual dress, he gave off an impression of power, intensity, and attractiveness. Michael crossed his arms across his chest, and she took a breath.
Had they really been in love once? It seemed like an impossibility. Kendra shook the thought out of her mind. She was here for closure. She was here to assist an old friend. That was all.
— Her Perfect Match by Preslaysa Williams

—
Janey pushed open the door to the McIntosh room. She thought the guitar on the bed told her everything that she needed to know—that she needed to set down the flowers and get out of the room as soon as possible. But when the bathroom door swung open and steam rolled out and the man from the stadium emerged wearing only a towel, she knew that she had a lot to learn.
He froze, but his blue eyes frosted with anger. “You!”
Janey slowly put down the vase on the dresser.
“Who are you?” He stalked toward her, his feet pounding on the hardwood floor. “Who sent you?”
“No one s-sent me,” Janey stuttered.
He barked out a sharp laugh. “Come on. You can do better than that. Who do you work for? Celebrity Rag? TMZ? People?”
“You forgot the CIA and the FBI.” Sarcasm bit Janey’s voice. Who did this guy think he was? Yes, he looked like Adonis in a towel, but that didn’t mean he could act like a demi-god.
He stopped inches from her nose, his eyes raking over her. “Where’s your camera?”
“In my room.”
He barked out another laugh and his hands, still damp from the shower, patted her down.
She stepped away, furious. “Excuse me. I don’t know who you think you are, but you don’t get to touch me.”
He frowned at her through narrowed eyes, and she met his gaze.
“You expect me to believe we just coincidentally happened to sit next to each other…wait—you must have followed me here.”
“Maybe you followed me!”
Confusion mixed with the anger on his face. “Why would I follow you?”
Janey stared at him with an open mouth for a moment before saying, “I think that you are the most conceited, arrogant person that I have ever met.” She grabbed the flowers off the dresser before turning back to him. “I’ll have you know that there are plenty of very nice, non-stalkerish-type guys that would be happy to sit next to me at a football game and to find me in their room!”
Janey slammed out the door, making it bang so loudly that the elderly couple in the Golden Delicious room poked out their heads to see what had happened.
Incognito Billionaire, Kristy Tate
The sound of the door banging against the wall caused Emily to spin on the spot and stare open-mouthed at a dripping wet David, in nothing but the world’s tiniest towel. The two of them gawped at each other, then Emily burst out laughing. Forgetting that she was wearing nothing but a white satin slip, she dropped the dress.
“That was the world’s fastest shower,” she said between breaths. She had to gasp for air after laughing so hard. “Why are you wearing a face cloth?”
David’s face grew crimson red as he clutched the towel protecting what was left of his modesty.
“There aren’t any towels in the bathroom.” He sidled toward the closet grinning sheepishly at her. Emily roared. In fact, she laughed so hard, she creased over clutching the splitting pain in her side as she fell onto the bed.
“You look––”
“Sexy?”
Emily eyed him. His body glistened in the golden sunset streaming through the windows, which softened the lines of his muscles. Yes, he did look sexy. But the miniscule square of cotton had her rolling around on the bed with laughter again.
— Who Wants to Date a Billionaire? By Laura Burton