Excerpt: "Devil's Claim" from the "Wings of the Wicked" boxed-set 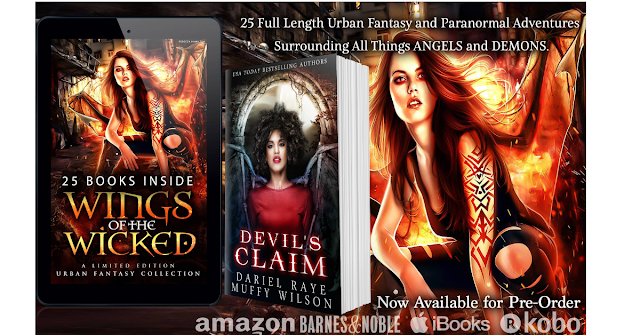 Centuries ago, he died for her. Now, it’s her turn.


Pride kept them from looking at one another, but their bodies could not lie. Recognition lived in their souls, rekindling memories of passion, love, betrayal….and death.
Apache Elder Aidan Stringfellow,V, is a very wealthy man with one wish – to free his only son, the brilliant, yet abrasive David, from the curse that has plagued his family for generations.  When his controversial plan for a cure is revealed, shock and disbelief are only the beginning, for David has deadly, yet beguiling secrets of his own.
Choosing to honor Aidan’s wishes, David and Katala unwittingly awaken an ancient evil desperate to lay claim to the last-born Stringfellow – David. The tumultuous consequences of a vengeful pact spanning generations, defies time, tradition, and death itself.
Katala finds herself falling in love with a man whose gaze and touch ignite long-forgotten passion, propelling her to fight for his life. She unearths one devastating clue after another on her winding journey toward the truth, but unseen forces escalate their attack as truth collides with myth. Clinging desperately to her own sanity, she must find a way to reconcile the two, for even her own identity comes into question. Trust no one. Not even David.
Time is running out. Promises will be kept, and if the devil has his way, souls will be claimed.

David opened the closet and fished through his luggage to pull out a pocket knife.
As Katala accepted the knife from him, she couldn’t help frowning in remembrance of the time she had cut him when they were children. “I am still so sorry about…” She reached up to touch the scar on his forehead.

He interrupted her apology. “It’s long forgotten.” The words were spoken without a glance in her direction. “It had to be done,” he added.

He made eye contact for a moment, then looked away again. “Nothing. Let’s do this.” He smiled, handing her a pair of scissors.
She quickly turned to begin opening the presents. As David lifted one of the boxes, Katala got a queasy feeling and touched his hand to stop him. “Who’s it from?”

David turned the box over and noticed there was no name tag. “It must have fallen off.”

“Take it outside the room. Something’s wrong. I can feel it.”

David looked a bit surprised by Katala’s request, but took the package outside the room anyway. Katala Followed.

Inside the box was a black, shriveled chicken heart with a note attached. You think because you married your little black witch you’re safe, but the Stringfellow bloodline will end with you.

Katala stepped back, clinching her fists as she looked at David. He showed no expression, but carried the box with its contents down the hall and dropped it in the waste basket. They did not speak of it further for a time.

Katala had always been told there was something mystical about the Stringfellows  - that their family line and hers were entwined somehow from centuries back, but even that did not explain someone’s desire to destroy all of the Stringfellows.

“How did you know?” David broke her train of thought.

“I just felt it. It felt like something was wrong when you touched it. Why would someone want to hurt you?”

He gave her a thoughtful look and a slight smile, then changed the subject. “Do you want to shower first or you want me to?”

“Oh. I’ll go first. It usually doesn’t take me too long.” She returned his smile and started for her luggage in the closet as she put the incident behind her for the moment. She could not rid herself of unease, though.

Katala stepped into the shower and took a deep breath. This entire experience was surreal. She could hardly believe he was actually in the next room waiting for her. She hoped he didn’t expect anything tonight, especially after the heart in the box incident, but there was only one bed. She watched the tiny white bubbles pop silently on her torso as she lathered her lower body. Her nerve endings seemed ultra-sensitive and every hair on her skin seemed to stand at attention. The warm water soothed her as each drop slid along her creamy chocolate skin to mingle at her feet.

Katala emerged from the bathroom in a white cotton gown that covered everything she could possibly cover and still sleep in peace. She even wore underwear. She was not going to make this easy.
David’s smile infuriated her. It was as if he thrived on her discomfort.
“Really, Kat? You look like a mummy.”
She had to laugh at her own silliness. “I don’t want you to get any ideas.”