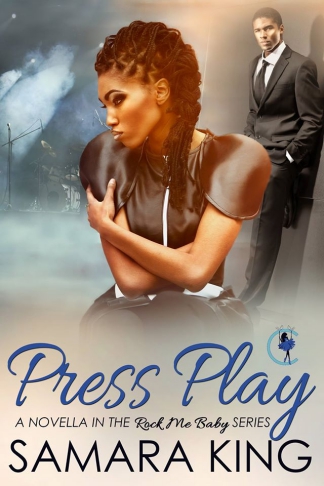 1.  If you (Play Baptiste) were deserted on an island, what would you take with you?  If I were deserted I would want my music with me, my drums, a good looking man and enough liquor to create my own party. I've never needed much or thought beyond the present moment...until lately with Preston. For the first time in my life, I actually feel like I am going beyond the norm, being stretched into never-never land. It's one thing to be living out this newfound fame with my band, Airi Moon, but love...I think it's love - it another thing entirely. 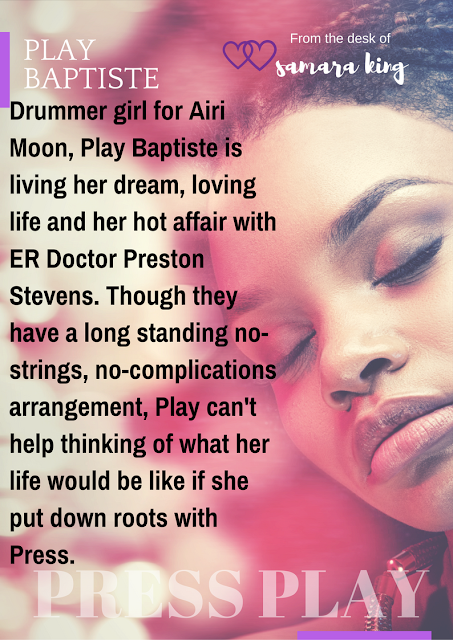 2.  Would you ever date someone completely opposite from them? If you have, what happened? The answer is a resounding "YES" for me, mega rich doctor Preston Stevens was as opposite as I can get. I mean here I am, a drum banging woman who grew up on the streets of New York, while I'm pretty sure he only takes care of people from the streets in the contexts of his emergency room! In truth, he gives me butterflies. I don't know what that even means! My longest relationship usually ends at the end of a tour stop with the band. He's throwing me off my game. You know, love em and leave em. It's always worked for me - until now.

3.  Use the first three words that pop into your mind to describe yourself? I would say I am creative, bold, down to earth. 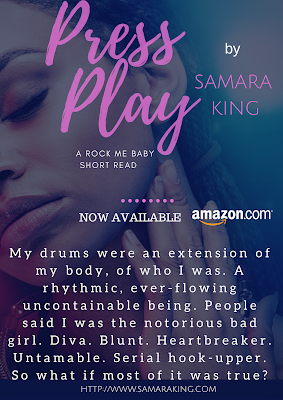 4.  If you had a theme song, what would it be? I think I would be a cross of Miles Davis, Nina Simone, classic Rock and Prince. I don't think I could be narrowed down to just one.

5.  What is the hardest task you have ever had to accomplish? I think walking away from my past has been an uphill battle - continues to be, but out of the storm came my talents, my deep love for music and my capacity to believe that I was more than where I started. Realizing it is a part of me, but not the core of myself that is when I truly begin to breathe and live. 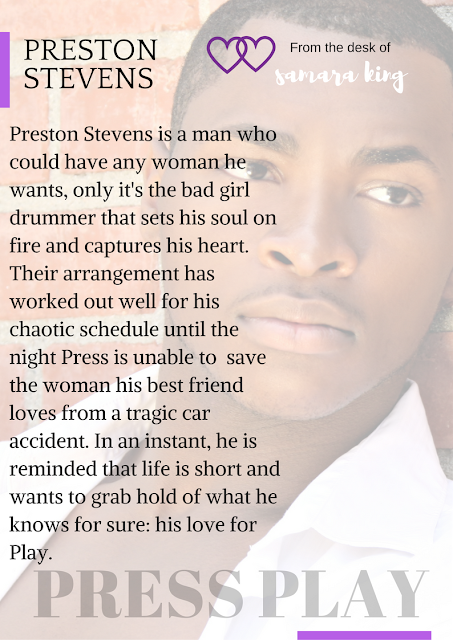 ABOUT THE BOOK
In my latest work, Press Play (a Rock Me Baby short read) Play Baptiste is a heroine after my own heart, broken from an unfair past and yearning for lasting love, much like the man she falls in love with Doctor Preston Stevens, who has ghosts of his own to overcome. Press Play is not the last you will see of these characters as they will reappear in the following three longer titles of the Rock Me Baby series, which follows the alternative R&B band, Airi Moon. The next book in the series is Fever Pitch.
ABOUT THE BOOK
Publisher:  Crave  Genre: Suspense, African-American Romance   Length: Novella   Heat Level: Erotic Romance  Themes: Bad girl with a love 'em and  leave 'em attitude meets her match with the sexy doctor
AVAILABLE NOW
AMAZON
GOOGLEPLAY
IBOOKS
NOOK
KOBO
Drummer girl for Airi Moon, Play Baptiste is living her dream, loving life and her hot affair with ER Doctor Preston Stevens. Though they have a long standing no-strings, no-complications arrangement, Play can't help thinking of what her life would be like if she put down roots with Press.
Preston Stevens is a man who could have any woman he wants, only it's the bad girl drummer that sets his soul on fire and captures his heart. Their arrangement has worked out well for his chaotic schedule until the night Press is unable to save the woman his brother loves from a tragic car accident. In an instant, he is reminded that life is short and wants to grab hold of what he knows for sure:   his love for Play.
ABOUT SAMARA KING
Samara King is the author of over twenty published novels, novellas, short stories and as well as poetry. Since her days of sneaking romance novels to the back of the library in grade school; romance fiction has been a consistent staple in Samara's world, soon after, the desire to write her own tales unfolded.
In 2011, she was nominated for Poet of the Year by African Americans On The Move Book Club.Samara has penned sexy tales for a host of publishers and also self-publishes under her imprint, Crave novellas. Previously she co-hosted SoundNOff, a poetic format for poets and spoken word artists and hosted InCharacterN10, a former showcase for authors on Blogtalkradio.com/samaraking. Samara’s first poetry collection, The Ebony Kryptonite, was well received and was followed with Stripped Barefoot, a sultry mix of poetry and spoken word, which went on to reach #20 in Chicago’s Top 40 on Reverbnation in September 2013.
Readers may visit her website at: http://www.samaraking.com
Samara KingAuthor of Sexy Contemporary RomanceWebsite | Blog | Twitter Some are born into fame....others are led to it!Press Play, Now Available, Crave Novellas