Reaper series book 4 Apprentice Killers isavailable now!As Brody reflects on his life, he begins to realize that his mentor’sinfluence may have impaired his judgment. 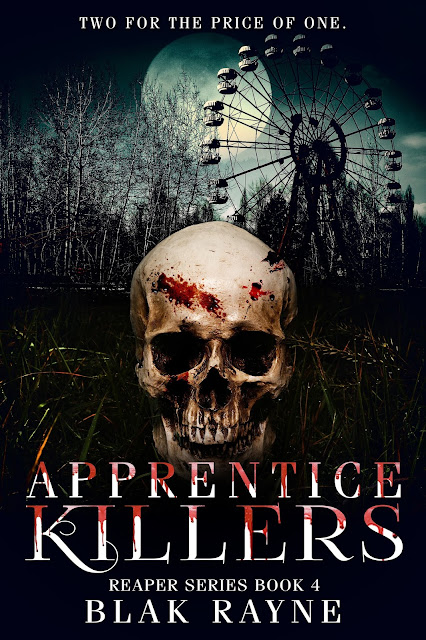 ‘Two for the price of one.’

inductees, his memories are stirred. People and places, he hadn’t thought about

in years awaken the most dormant of his emotions, and the present becomes

blurred with the past. Not wanting to risk the life of the only person he cares

about, he leaves Zeus behind to fight the pharmaceutical giant, for what he

believes will be the last time.

Brody caught a glimpse of auburn hair—sunlit hues of radiant red. The young

store. She had a vivacious air, bright smile, and perky bounce in her step that

caused her ponytail to swish her sun-kissed shoulders. He followed her out of the

supermarket into a parking lot lined with dry grass and giant trees. Most were of

the nut variety, and dehydrated seedpods littered the ground.

He sat on a wood bench, slats faded where the lacquer had rubbed off.

Screwed to the backrest was a dedication plaque in oxidized brass that read, ‘In

when he noticed subtle movement in his peripheral. “I knew a girl similar in

The young woman got into a compact, blue, European-model car.

“When was that?” Zeus sat down on his right, dropped a bag of groceries

between his runners, and lit a cigarette.

“I get the feeling your memories aren’t pleasant.”

“Jessica Humboldt was a remarkable bully.”

“God, I can’t stand bullies.” Zeus flicked ash at the ground and took another

“Don’t misconstrue my choice of adjective. I despise those who prey on the

weak. But her strength of purpose fascinated me.”

“Well, good. For a moment there I thought you’d gone soft on me.”

He noted the mordant ring in his lover’s tone; Zeus was evolving. The more

confidence he acquired the more openly he spoke his mind. He watched the blue

car merge into the traffic. “She believed her superior intellect gave her privilege,

and she turned humiliation into an art form. She could pinpoint her victim’s

Achilles’ heel. It was the leverage she used to terrorize.”

Zeus looked at him. “So what did she do to you?”

The question didn’t catch him off-guard, however, it did trigger a physical

response. He felt an ache in the center of his chest that he could only associate

with an emotional loss. He’d experienced it just once before. “It isn’t what she

Brody blinked slowly, and when he opened his eyes the environment around

him had changed. He was in the second-floor hallway of his high school, and a

girl with the same auburn hair was inside a nearby classroom. Jessica’s

expression wasn’t congenial like the smile of the woman from the supermarket;

instead, her mouth was curled in a vicious snarl. The girl seated in front of her

covered her face with her hands. Over a period of two semesters, he’d watched

Jessica systematically torment a number of students both male and female.

Jessica yelled and slapped the girl. Teary-eyed, the girl slid her tremulous

hands higher, shielding her head. The others teenagers in the classroom feigned

ignorance. They looked out the windows, buried their heads in books, or

continued to eat their lunch. No one dared to get involved. Brody didn’t feel

anything in particular for the victim. But he felt something simmering deep

within for the bully.

Rising from his slouched position against the wall, he stared at Jessica. When

she noticed him, she froze with her fist in the air, and her already stern lip line

soured to that of aversion. She grabbed her knapsack and burst into the hallway.

As he knew she would, she’d come to confront him. The coldness in her glare told

him everything, but he wasn’t fazed. Again, his mind elicited no emotional

response. And his heart continued to beat at a relaxed and steady rate.

“You’d better mind your own business, geek.” She jerked her thumb towards

the classroom. “If not, you’ll get worse than she did.”

“Prepare yourself,” he said evenly.

turned around. “What the fuck did you say?”

Everyone in the classroom watched, their curiosity growing by the second.

“To simplify: you don’t scare me. Threaten her once more and I will kill you.”

She didn’t move, and she didn’t show any obvious signs of fear. However, he

strap, and her pupils dilated. He sensed a rise in her pulse and a hesitation to

react. She was terrified and debating her odds.

Sliding his hands into his hip pockets, he bent closer and flashed a grin. “I

can see straight through you, bitch.”

She leaned backwards, trepidation growing in her eyes, and nervously

barked, “If you know what’s good for you—you’ll just stay the fuck away from me,

Zeus bent forward, dropped his butt, and mashed it under the grinding

pressure of his shoe. “I’m guessing she didn’t stop after that.”

“The trouble escalated. The only deduction I could make was that she’d seen

“I take it he was the high school boyfriend.”

Blak Rayne is an author of gay romance. She loves to write and believes it’s

one of the greatest forms of self-expression. What better way to see inside the

human soul? Blak Rayne resides in Canada, and yes, she is a woman, wife, and

mother. She’s been writing and drawing since elementary school, and she loves

anything that involves the arts. As for family, her daughter is her toughest critic