Spotlight on O2O Rewards: "Mine For One Night" by Ju Ephraime

Enter the Rafflecopter below for a chance to win book one in Ju Ephraime's "Twin To Twin" series! 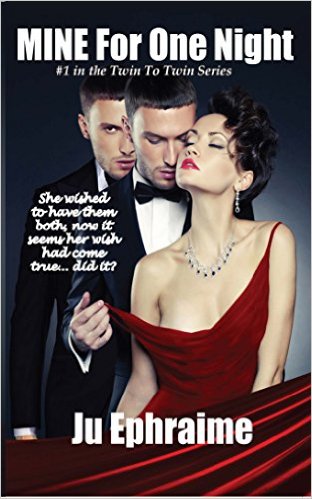 Lynn is in a quandary. Ever since she could remember, she's had a thing for twins, not just any twins, identical twins. Now she is in a relationship with one half of the most handsome set of identical twins, but she can't stop thinking about the other. She had one, but she wants them both.

Nicholae and his brother have a great relationship. They never covet each other's property. If one has something, and the other wants it, they share, whatever it was. But now Nate has something Nicholae wants, and he doesn't know how to ask to share because something tells him Nate won't share this with him... his new girlfriend, Lynn.
Lynn has a need, and Nicholae has a want, and then there's Nate in the middle. Will he give in to his brother, or will he put his foot down and deny him this one time?
Content warning: Due to graphic sexual situations and content, this book is definitely not appropriate for younger readers.