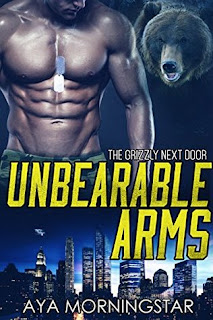 Violet is keeping a secret…

She’s a curvy archaeologist who finds a mysterious artifact. She’s absorbed in her work and has no time for dating, at least until badass ex-SEAL werebear Asher Pines come back to town. He’s the man she’s always longed for, and he looks better than ever, but he’s brought trouble with him.


Asher’s done with the SEALs, and with SHIFT…

He’s ready to live a normal life: a mate, kids, a normal job–the whole package. When he nearly crashes into Violet, he wonders if he’s found what he’s looking for. Her full curves and wide hips are to die for, but she’s hiding something, and it might just keep them apart.

Andrei will do anything to get his wings back…

After a military experiment, powerful dragon shifter Andrei can no longer shift. But even as a human, he’s just as strong and resourceful as ever, and he’ll do whatever it takes to get what Violet has taken from him.

Alex–from Unbearable Curves–is back to team up with Asher in this sizzling paranormal romance story packed with action, humor, a HEA, and no cliffhanger!

Check out the entire “Grizzly Next Door” series!