Spotlight: "I Love Me Some Him" by Roxy Wilson aka Shari Michaels 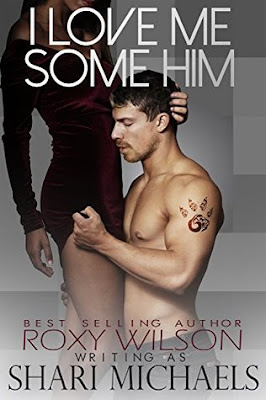 New Release from Roxy Wilson writing as Shari Michaels – “I Love Me Some Him: A BWWM Interracial Romance!” ‪#‎99cents‬

Faye Bostic knows that not everyone approves of her position as editor-in-chief of Missy magazine. She has to stay strong, even if it makes people think she’s hard-hearted … but when she hires Dalton Cartwright, her sexy young intern makes her feel anything but cold.

Dalton admires his take-charge, independent boss. Like her, he wants to earn his own success. But her beauty makes him want impossible, forbidden things that fire his fantasies.

Temptation is a constant battle; until the night they finally give in to their desires. Their forbidden relationship quickly becomes a target for everyone who’d like to pull Faye down. She and Dalton are up against jealous rivals, a press hungry for scandal -- and their own secrets.

Her body shook as she rode the elevator up to her office. She had no idea what to expect when she walked in. Through the glass, as she approached, she could see the back of two men's heads. She knew instantly who they were, and the fact that they were in there together wasn't a good sign. She was going to have to explain to both of them a decision she'd made.
Faye took several deep breaths before walking in. She didn't bother with a fake smile or with giving Dalton a kiss on the cheek. She was smart enough to know when she was in hot water and that sucking up or pretending it was all cupcake and ice-cream wasn't the answer.
"Morning," she said, practically collapsing into her office chair. From that angle, both men towered over her, making her feel weaker than she'd ever felt as an adult. She'd worked hard to be a strong, self-confident person, but she felt all that shrinking away in a matter of seconds. "I take it you have questions and for good reason, but I think it would be best if I talked to you separately, since it affects you both much differently." She tried to sound calm even though she was sure even her organs were shaking.
"No more secrets," Dalton said coolly before pulling up two chairs and sitting down on one of them.
The other man remained standing.

Find Roxy on the ‘Net!