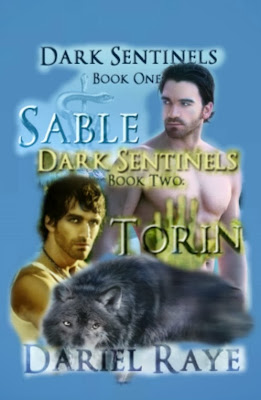 Thanks to a few of my wonderful reading friends, there's a new combo paperback with "Dark Sentinels Book One: Sable" and "Dark Sentinels Book Two: Torin" all in one and completely "signable." A few weeks ago Donna Seger Kilroy and Donna Reynolds suggested that I publish a paperback with both stories. Let's face it - much as we love our Kindles and Nooks, having all our nifty books in one place, there's still nothing quite like holding a book and turning real pages.

The new paperback sports an alternate ending a bit longer than the ebook but still in keeping with the original details, and I added a few more details to book two and a preview of "Dark Sentinels Book Three: Parrish" as well. Again, the characters are the same, their stories continued in each subsequent book with the addition of a new hero and heroine. 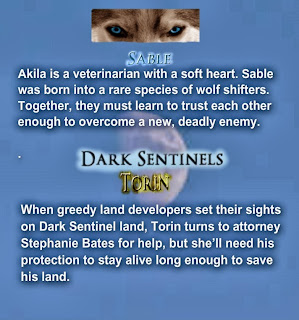 Sable Sable, a sentinel wolf shifter, is captured and locked in his wolf form until Akila, a veterinarian, tries to tame him and unleashes a 6'5" baby blue-eyed surprise. Dr. Akila Marshall is a veterinarian with a calling – save as many stray animals as possible. The only child of wealthy, yet distant parents, she’s convinced that love is not for her. Until… Sable’s search for his twin sister leads him to Akila. Born into a rare species of wolf shifters whose main purpose is protecting others, he has always been forced to fend for himself, but Akila’s loving, protective nature draws him – and not a moment too soon. Together, they must learn to trust each other enough to overcome a new, deadly enemy.

Torin When greedy land developers set their sights on Dark Sentinel land, Torin, a sentinel wolf shifter, turns to attorney Stephanie Bates for help, but she’ll need his protection to stay alive long enough to save his land. Real estate lawyer, Stephanie Bates, has risen to the top of her field through meticulous sacrifice and goal setting. She has no time for distractions – and that includes pets, messy relationships, and loose ends. Torin DuMont is a forensic scientist who chose the profession to avoid dealing with people as much as possible. Raised by a stepfather who hated him, he’s been forced to live a life of solitude, fueled by anger and distrust. When wolves and shifters start turning up dead, Torin must battle an enemy bent on destroying those he was born to protect. His greatest challenge, however, is Attorney Bates and the surprising effect she has on his heart.

Unknown said…
OOOoooohhhh....! Two books in one loveable, huggable paperback volume! There's NOTHING LIKE A PAPERBACK!!
October 25, 2013 at 3:04 PM