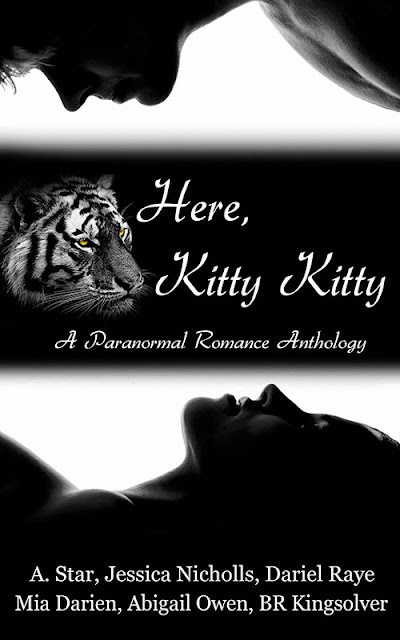 "Here, Kitty Kitty" is a 6-story paranormal romance anthology about big cat shifters! All proceeds benefit the Exotic Feline Rescue Center in Indiana, so help us feed and shelter these beautiful creatures and enjoy a few great stories in the process.

Join our event to enter the Rafflecopter giveaway, and please share the event and tag all your friends while you're there. Here's a rundown of the blurbs, followed by an excerpt from the third story in the anthology, "Divine Passage."


"His Jaguar Princess" by A. Star [Jaguar]
The Story: Jaguar shifter Selene Peters can’t deny her feelings for the tycoon Lucas King. Somehow, he's penetrated her barriers and become more than just a client, but loving a human is dangerous and she fears her past repeating itself. Could he help her overcome the past or will she sacrifice her happiness and succumb to it? Not if he has anything to say about it...

"In Our Nature" by Jessica Nicholls [Cougar]
The Story: When Mira's privacy and independence are threatened, she can be very nasty.  Daniel is an expert on American mountain lions. His assistance is requested after an 'incident' on Mira’s front lawn. When the two meet, they recognise each other in more than one way.

"Divine Passage" by Dariel Raye [Panther]
The Story: Kimani, a breeder with the power to preserve the human race, must depend on her guardian, Ahkil, a black panther shifter with more than one reason to distrust humans, but his secrets could change the course of her life forever.

"Hannah's Fate" by Abigail Owen [Cougar]
The Story: Cougar shifters have allied into groups, together in a rocky alliance to protect themselves against other shifters. Hannah Keller becomes the targeted Mate for Kyle Carstairs, the treacherous soon-to-be Alpha of another group. Meanwhile, Nick Jensen, her childhood hero and longtime secret crush, has returned home with hopes of claiming Hannah for his own. But will he be in time to rescue her from the Carstairs's schemes?

"Full Moon" by BR Kingsolver [Jaguar]
The Story: The full moon can get a girl stirred up, especially with a handsome cowboy paying her way too much attention. If it wasn't for those damned werewolves causing trouble and getting in the way...

Kimani motioned for Ahkil's permission to come closer, her hands covered with gauze. She’d obviously been taught to keep her face and body covered at all times, hiding the color of her skin, a tell-tale sign of what she was – a breeder. There was no hiding that. Her scent alone could drive human men to war.
Ahkil moved toward her instead, wary but intrigued. Born into a family of guardians, he’d been protecting and tracking since his days as a cub, but humans from the artificial breeder colonies had taken everything from his family during his early years. He’d always worked around them, but never for them. Big difference. They were notoriously deceitful, and only the Almighty knew what weapons she hid under all that garb. She was completely covered from head to toe, even her eyes remained hidden.
“Um, hi.”
Ahkil narrowed his gaze, willing her to continue with her soft voice, like silk sliding along his skin. Even in panther form, he possessed the ability to communicate with her telepathically.
“You’re Ahkil, right?”
“Yes, and you are a human breeder who has no right to be in my territory. We’re supposed to be leaving tomorrow, so what brings you to me an entire day early, unannounced?” He glanced at her leg.  “And why are you limping?”
“My village was attacked. My caretaker was murdered and one of the bastards shot me in my leg. I need you to take me to my assigned breeder colony sooner than we’d planned.”
The very term–“breeder colony”–made him cringe. Sounded like a roach haven. He stood still, squinted his green eyes and glared at her just to see how she’d react, wondering if she grieved for Bagdi.
He sensed her frown, the atmospheric change heavy with negative energy, and if his panther vocal chords could, he would have chuckled. Despite the fact that she was completely covered, he couldn’t help noticing that her aura was actually quite beautiful for a human. It was as if he could see her soul, and there was no pretense there. Rare.
“If you can’t take me now, I’ll go alone. I can’t stay here and I don’t have anywhere else to go besides the colony. At least they’re expecting me.”
“Are they?” he drawled, wondering if her eyes were the same color as most breeders.
Having achieved the desired reaction, he pushed just a bit more. “Go on, then. If the Almighty allows, I’ll catch up with you tomorrow as scheduled, if you’re still alive.”
He called after her, unable to stop himself.  “Make sure your leg doesn’t start bleeding again or you’ll draw all sorts of unwanted fans and that will make my job much more difficult.”
Her flash of fury singed him as she turned and strutted away, limp and all. He had to give it to her–she had exceptional self-control. Most people would have called him a string of names by now, but she simply turned and walked away. Smart little breeder. She’d passed all his tests so far.
Ahkil sauntered after her and slowed his pace to walk beside her. It probably shouldn’t matter to him whether she lived or died, but it did.
big cat shifter anthology Facebook event Here Kitty Kitty anthology Rafflecopter giveaway