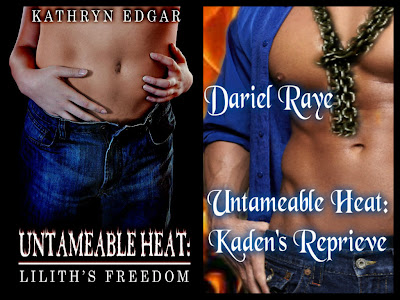 More than 190 people have joined the "Untameable Heat" launch party and tour already, and we'd love to see you there too! As you know, the more the merrier :-) Official release day is July 11th, so we're celebrating that day with a feature post at Mommasez (all day), and don't forget to enter the Rafflecopter giveaway while you're there. Then, join us from 8PM - 10PM EST for our first launch party at the "Untameable Heat" event page


Lilith's Freedom by Kathryn Edgar
In the dark alleys of the riverfront sits a club known only to those evil enough to enter.   The club is called The Master’s Lair.  It is frequented by the evil underbelly of the supernatural world.  Lilith is a beautiful succubus entertaining nightly in the Lair.
Lilith has grown bored with her life.  She is ready for more.   The Master has promised her release from her succubus bonds is possible, except the price may be higher than she can afford.

Kaden's Reprieve by Dariel Raye
Tanya has been running for her life for two years, but when Ms. Lillian, owner of the exclusive “Heaven’s Touch” match making service, graciously gives her a week’s stay at her private bed and breakfast in St. Augustine, FL, she seizes the opportunity to escape to a possible hideaway.