Hi, Everybody! I met Simon Okill online a couple months ago, and his new Bigfoot series is so intriguing I had to share it with you. Here's his interview with a short excerpt from the book. Enjoy! 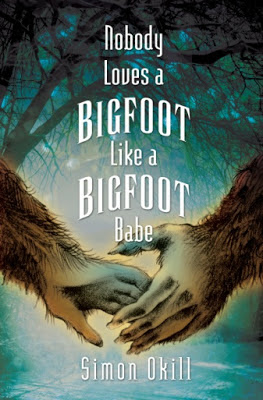 1. When did you know you wanted to be a writer? What were some of your first steps toward making your dream a reality? How would you say most of your stories are conceived? Dreams? Research? Experience?
For a long time I had been dabbling on the keyboard while juggling a hectic work life then after an accident I used my writing to fill my spare time until now it’s a full time job. My dream became a reality when Nobody Loves a Bigfoot Like a Bigfoot Babe was accepted by US publishers Christopher Matthews Publishing. My stories come from somewhere that defies logic and understanding.

2.  What 3 things would you like readers to know about you?
I am an avid fossil collector, every spare space at home is where you’ll find a fossil, I love to stroll on the beach and think of my next story and I am a High Chaparral fan.

3.  Tell us about your books. Genre, titles, any favorite characters? What can we look forward to from you in the near future? WIP’s, upcoming releases?
Nobody Loves a Bigfoot Like a Bigfoot Babe is an adult urban fantasy full of romance and wild humor, really wild, like Animal HouseX10. Bigfoot part 2 is almost done as a first draft and escalates the pranks to extreme. My WIP due for release this summer? Is Eternally Yours Part1: The Blood Hunt where an evil vampire cult hunts their queen who has lost her memory and is being treated in an asylum in France 1925. Part will follow shortly. And as for wereshifters, my next WIP is SS-Steppenwolf based on fact about the Werewolf SS Units used during The Battle of the Bulge. It’s a blend of Indiana Jones and American Werewolf.

4.   Is there a common thread in your books? How do your values show up in your writing? What do you want readers to take from your writing?
Paranormal seems to stick with me and my stories, Dariel. That genre is so liberating, almost more than sci-fi. As for my values, well to be honest I’m kinda nuts and it shows in my writing – they go out the window. I was even told by an agent that I should be locked up for my vampires using people as bottles of wine – duh! I can only hope that my readers feel satisfied that they have had value for their time and perhaps have learnt a thing or two about me as well. As Mark Twain said, to know me, read my books.

5.  What do you look for in a good book? In what ways would you say your books exhibit these qualities?
A rollicking great story that sticks with me and urges me to read more. My book will certainly stick with the reader, Dariel, as I have not been able to find anything similar so its uniqueness combined with its feel good quality will hopefully bring a smile.

6. What are some of the best social media, marketing, and publicity tips you’ve come across?
I was a late starter to social media and have had to learn the hard way, so to all beginners out there set up your social media – Twitter, Facebook, Google+, Pinterest at least three months before the release of your book. Send feelers out to tantalize the reading community such as lines from your book, questions about your book’s subject and prepare for giveaways to promote.

7.  What are some things you know now about writing and being an author that you wish someone had told you at the very beginning?
writing is easy, marketing is hard. Before you even start to write, join writers’ forums where you can learn what others have been through. Once your story is written and rewritten a dozen times, pay a good editor to go through your book with a fine tooth comb. It’s absolutely essential. Be as professional as you can. Be prepared to outlay some cash for marketing too. Writing isn’t cheap.

8.   Along that same line, what are some of your favorite resources?
Goodreads is way up on my list. It took a couple of months to crack the GR code – set up a profile – create your reading list – review like mad – then add your book to Listopia and get it voted.

9.   What lifts your spirits when you’re discouraged?
writing! To leave my miserable world and enter one of my own creation where I can be free with my characters, where I can do what the hell I like and get away with it, until it’s time to eat.

10.  What tips can you offer towards building and maintaining a strong support system as a writer?
Be prepared to read and review other writers, interact socially, listen to advice, give advice, help others so they may help you. We all need one another. They say writing is lonely, but it doesn’t have to be.

Nobody Loves a Bigfoot Like a Bigfoot Babe
by Simon Okill

The Northern California town of Big Beaver has become a haven for Bigfoot, alien sightings and is home to The Phantom Bigfoot Bather. One particularly weird Beaverite, Duane, has kept the Bigfoot a secret, but to his utter dismay, a female Bigfoot abducts a teenager. Duane must use all his guile to stop his secret from getting out, especially now that MB, his close friend and crypto-zoologist, is on the trail, along with Sheriff Lou and the FBI. Can Duane keep his Bigfoot friends a secret? And what does MB discover deep in the forest?

http://www.barnesandnoble.com/w/nobody-loves-a-bigfoot-like-a-bigfoot-babe-simon-okill/1114223436?ean=9781938985034
Sample:
With almost unbearable excitement, she stared at him unzipping his jeans to urinate. She saw the steady flow of his pee on the ground and against the tree.  The smell of his manly essence and muskiness aroused her.
She swished her hips suggestively, cooing, “Woooo-woooo-woooo.”
Behind the cover of the thickets, Olaaa placed each big foot to the ground with extreme care and walked towards her unsuspecting plaything. She stopped behind the leak tree and listened to him zip up his fly. Olaaa breathed heavily with excitement. She licked her lips.
An owl screeched, as if to alert Olaaa’s pale one, but the plaything was a little too happy on the juice to heed the warning of the wise old owl. He belched.
The chosen one called out. Olaaa thought he was calling to her. Olaaa sighed on hearing the pretty pale one’s voice. She sniffed the night air then sniffed her own pungent odor. She sniffed her very hairy, excessively damp armpits.
She snorted nasally with disgust. She smelled like a raccoon’s behind. She needed a good dowsing in the river if she was going to attract her pretty boy.
“Woooooo-wooooooo,” she called her plaintive mating call excitedly into the night.
The unfamiliar calling sound—which was so loud it seemed to be inches from his ear—which it actually was, suddenly warned the plaything. He reacted as if in danger. Before he could cry out, a big hairy hand, pink and calloused, came up to his face and covered his mouth, stifling his scream.
Olaaa was so excited she let out her mating call.