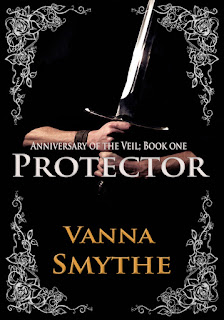 Duty versus love is the one battle warrior Kae doesn't know how to fight.
Kae has trained his entire life to become an elite Protector of the Realm. But when he earns that honor he finds himself protecting something far greater: the Veil separating two worlds. On one side of the Veil lie untold stores of magic. On the Realm's side, magic is all but obliterated, and Kae is one of the few who can use it. The priests who secretly rule the Realm will do everything they can to control his growing magical abilities. He's willing to pay the price, even though it comes between him and Issa, the princess he loves.
But the Veil has weakened over a thousand years and powers on both sides will stop at nothing to keep it intact. Strangers from the other side have kidnapped Issa to take her across the Veil and sacrifice her to strengthen it. Kae is the only one who can find her. If he goes after Issa, he loses everything he's worked so hard for. But if he chooses duty over love, Issa will die.

"That this is a first novel by Vanna Smythe is quite astounding. She not only tells a wonderful story with characters you can't help but care about, she also brings her world to life. This book has certainly left me wanting more and I look forward to the next installment eagerly.
- Andy Angel of Ebookwyrm's Book Review Blog

"Smythe's world's magic, political structure, and geo-arcana are unique and the conflicts are well done. I enjoyed reading this book a great deal and look forward to the next installment."
-  Ernie Laurence, Jr. author of Islands of Loar: Sundered

"This novel's primary strength is in its worldbuilding and the crafting of this world beyond the Veil where priests rule the king and magic is employed in strong and evil ways. Protector was an enjoyable debut and I will look forward to book two and finding out what waits on the other side of the Veil."
- Elloise Hopkins, author, book reviewer and blogger

Stop by again tomorrow to see Synthia Williams's contribution to my Christmas list:-)