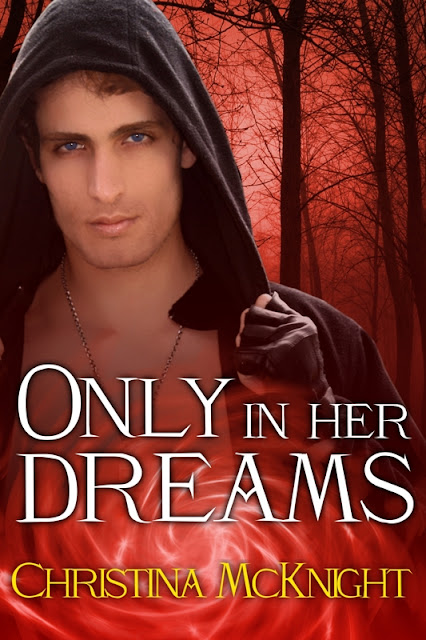 As promised, author Christina McKnight is sharing her new release with us today.

Welcome, Christina, and congratulations on your new release! This is a smokin' cover, and I'm sure readers are eager to learn more about the story, so here it is. I've already added it to my kindle. Darius is definitely worth getting to know :-)

Only In Her Dreams, The Oneiroi Book 1
When Lucessa Sarcona awakes from a recurring dream, she has no idea her life is about to be turned upside down. A stranger, familiar to her dreams, shows up in the flesh, and Lucessa knows she’s either crazy or experiencing something not of this world.

A war ensues between three demigod brothers. One, trained to rule Erebos, is violently replaced. One forced to return to his homeland and lead the dream-gods of the Oneiroi. And one is charged with the impossible task of protecting Lucessa. How is she linked to the Oneiroi? Why do two brothers seek to keep her hidden and protected? And how does another plan to use her against the two demigods who love her?

Will Lucessa’s dream man have the courage to claim her as his own or will he bow to the command of another, forsaking the one he loves?

Only in Her Dreams is a modern spin on a Greek legend--the new direction of Urban Fantasy and Paranormal Romance, moving from angels, demons, vampires, and witches and toward the realm of demigods.

Excerpt:
Darius preferred to let his brothers believe his powers had indeed been stripped, gone with his banishment. That’s where his deal with the Dark One came in handy. He’d had a link to the girl for years now, bringing a dark presence to her dreams-her nightmares.
Closing his eyes he concentrated on the dark side. A thrill coursed through his body every time he traveled to this forbidden land. He would lead these people, his type of people.
His eyes opened and he stood in front of a rusted, black iron gate. It parted to allow him entrance.
He proceeded down the fog-ridden path toward the castle in the distance. It was an imposing structure covered by black tinted ivy. Everything in this place held a black tint; the streets, the building, and most of all—the people. Soon-to-be, his people.
As he approached the massive fortress, the doors glided open of their own accord. The interior was as dark and fog laden as the exterior, dim candles shown upon the rug laden floor he moved across.
“The Dark One will see you in the billiards room.”
Darius stiffened and stopped his progress, turning toward the voice behind him.
No one in sight. What the fuck?
He straightened his shoulders and continued through the foyer and down the hall leading to the billiards room. Again, doors parted and he entered.
The Dark One lounged against the far wall, cue stick in hand. He studied the freshly racked pool table. “You’re in time for a game. Grab a cue, Darius.”
“Yes, My Lord.” Darius retrieved a cue stick from the wall and turned toward the table. The Dark One leaned across it, aiming for the racked balls.
“I hear you have good news for me,” he said as his stick connected with the white ball. On impact, the colored and striped balls rolled toward the corner pockets.
Darius watched in awe. Every ball found its home in a hole, ending the game before it start. What the fuck?! he thought to himself, for the second time in less than ten minutes.
“Well?”
“Yes. My informant gave us accurate information about where the girl lives,” Darius said.
“Have you confirmed this for yourself?” The man stood straight and returned his stick to the rack on the wall. He faced Darius across the table, hands on his hips. The man was intimidating, the thing that nightmares were made of.
“Of course.” I’m not an idiot.
“Well?”
“Well…what?” Darius asked. Standing around a pool table, in such a casual setting should be relaxing, but he was on edge.
“Why isn’t Erebos mine yet?”
Good question. How to answer that without getting his ass set on fire, he wondered. “I’m working on it.”
“Work faster. I’m in need of a new home, this one’s going to shit.” The Dark One stared at Darius, no hint of a joke on his face.
“I don’t plan to drag this out longer than necessary.”


Christina McKnight
Urban Fantasy and Historical Romance Author
Only In Her Dreams, The Oneiroi Book 1 - Available on Amazon
Shunned No More, Forsaken Lady Series (Book 1) - Available May 2013
Follow me on Twitter -  https://twitter.com/#!/CMcKnightWriter
Check out my Blog - http://www.christina-mcknight.blogspot.com/
Add on Goodreads - http://www.goodreads.com/book/show/15734380-only-in-her-dreams

Christina M. McKnight said…
Thanks for hosting me! To celebrate the kick off of my blog tour I've lowered the price of my book!
October 5, 2012 at 10:04 AM