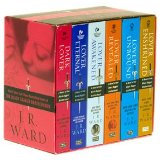 In my last post I mentioned bestselling author J.R. Ward’s capture romance installment. Well, this weekend, and very likely next week, too, I’ll continue with my hero-obsession. When I read the first installment in Ward’s Blackdagger Brotherhood series, I was sold on paranormal romance once again. She helped revolutionize the edgy, tormented hero saving the world while waiting to be loved by just the right woman – the one and only. Since the Brotherhood, quite a few other breeds, new species, even demonica working in an underground hospital, have caught my eye. This weekend, I’d like to make use of the Brotherhood for my study, and of course I need your help.


One of the many things I love about the Brothers is that while they all have heroic characteristics in common, each one is still unique, and has some quirk or trait all his own. Now, this either makes me love him more, or it doesn’t necessarily move me.  Of the six original Blackdagger brothers, plus Butch O’Neal, that makes it seven, choose your favorite, and tell me why in comments. Oh, okay, I know it’s hard to choose just one. Choose two. To make it a bit easier, I’ll list them below…


Bk. 10 – Lover Reborn – Tohrment (Tohr) – Returned emaciated a hollow –
disappeared after his shellan was murdered – they were the adoptive
parents of John Matthew before his change.

Tell me. Which ones tugged at your heartstrings most? Don’t know about you, but the same characteristics that make me yearn for my make-believe heroes are the same character traits I’m drawn to in real walking talking men. They’re not always so dreamy, but every now and then they can do some pretty heroic things, too J
Blackdagger brotherhood Breed characterization Demonica heroes New Species paranormal Paranormal romance

Inez Kelley said…
I think Ward too an established thing(a brotherhood of alphas) and kicked it up six notches.

Zsadist tugged on my heart strings the most but Wrath is my favorite. Brutally strong yet he cradles Beth like she is glass. His sightless eyes don't takeaway from his alpha-ness.

Dariel Raye said…
LOL. Hey Inez! I'm definitely with you on Zsadist. Deep and tortured, just the way I like them, and he'll kill for Bella. Crazy about Vishous and Wrath, too.
April 21, 2012 at 7:20 PM